Spring all over! It is very distracting. An eager little mr. Blue Tit has moved into the nesting box on our north wall. To attract a mate he is picking on the

box sides from the inside, which resounds through the entire house. And he is no late sleeper! He wakes up with the hens and starts picking, offering room and board in new delicate surroundings with no cats in sight. Hope he soon finds his Queen of Hearts so your editor can go back to work again undisturbed. But it is also a sure sign of spring, so he is forgiven.

Spring also means new website!! This is what meets the eye when you write www.siljanairpark.se in your browser! Our website has really undergone a minor revolution, become more modern and appealing. Thank you, Florin and Tibi who created this fine website. As it is very easily edited you may expect to find changes fairly often so make a habit of checking the site regularly. Note the calendar. There you will find different events listed.

Our annual meeting was held at the club-house on a beautiful spring day. The mandatory agenda was followed and the meeting concluded that the board had done their job in a responsible way and everyone could be satisfied with this. The minutes will be out later.

Some time was used to discuss the common plots. The meeting decided not to spend extra money on the plot than proposed in the budget for the time being. Extra money will be spent on levelling the edges of the taxi ways in order to let the tractor and grass cutter move more easily.

After the meeting Peter Muus hosted snacks, and Christer Wretlind gave white wine and red wine transformed into tasty sangria. The annual meeting in the flying 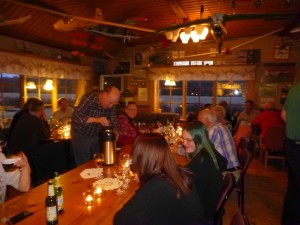 club followed, and after that the plan was to file up to Buffils Anns and have a delicious buffet! Alas! Water supply problems in the restaurant caused a swift change of plans, and in stead we witnessed a catering service with fantastic local food in our cozy flying club house. Thanks to the couple Strandh for this flexibility and for the excellent food! Joachim Hansson sponsored cold well tasting Flying beer. During the intermission a slide show of pictures from the past year was running on the screen, causing many nice walks down Memory Lane.

During the week-end around the annual meeting we had visitors from Germany. A nice family from Hamburg, the Weiss-family, were attracted by an advertisement to Siljan AirPark. During the month of March intense correspondence between the Weiss and your news editor took place, and all the goodies and yummies that could be drawn from our airpark were served for the family, and they told us that they were literally mouthwatering!!! The family spent three days at the airpark, attended the annual meeting and the following dinner and had a great time! On Christian Weiss’ facebook site you may enjoy their nice character of Siljan AirPark and great pictures! Thanks, Christian and family, we enjoyed having you and welcome you back.

There are now 8 plots for sale in Siljan AirPark. Go to the page Village and you will find a list there with contact information to the present owners.

The airpark village and the flying club have entered into a collaboration project: airfield safety. An old dream is now come through. Members in the group are Fredrik Ericson, Fredrik Pellebergs, Peter Muus, and Ingmar Lind. All of these are already engaged in flight safety issues on different levels. The main focus for the group will be ensuring safety on the airfield area. Additionally, safety in the air will be an issue as well. For a beginning two FLARM equipments have been sponsored to the club by Fredrik Pellebergs to be mounted in the two club-owned gliders URX and UIA. The group has its own site on the flying club website www.siljansnasfk.com, named Flygsäkerhet. A number of useful links concerning flight safety have been placed there. The group intends to draw on additional local expertise, controllers, meteorologists, commercial pilots etc.

From the Flying Club 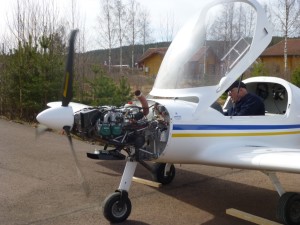 thanks to hard work, fair treatment from Rotax and the dealer and most important a generous donation from a club member Stig Persson VPS is now equipped with a brand new engine and ready for the season.

The transponder in VPS has for a long period of time been out of order. It turns out that the transponder itself is functioning perfectly but something in its very near surroundings is interfering. To disclose what this “something” is about and to remedy the failure a new donation landed in the flying club from the very same member who made the engine change possible earmarked to fix the transponder.

Note that the flying club has its labor day on May 1, so the occasion for an entire week-end filled up with hard work in good company is offered.

Glide-in is arranged June 27th if weather permits alternatively June 28th.  Check the calendar on the Siljan AirPark website and the facebook site

The local artist Mona Dahlberg in Olsnäs is retiring!! L December 31st 2015 Mona stops painting other than special orders. Her beautiful Dalecarlian decorations on everything from coffe-filter holders, mailboxes, hard bread containers to small welcoming signs for your house lightens up in many places already in our airpark. Mona intends to have a Christmas sale during December on what is left of her stock, so you might as well make sure that you find some of your Christmas gifts from Mona’s Målarbod.

A warning came in: Be carefull with GoPro cameras mounted on your aircraft.

Saxed from a Danish site DULFU news:
At a recent meeting with Sirius Aviation Insurance asked Director Hans Jørn Christensen me to mention for our members that we should be careful not to put GoPro or other cameras on the outside of our aircraft. If you do, the plane – in legal terms – is not airworthy and the insurance company will refuse to cover any damage. If you cause damage to third parties and it can be proven that there has been mounted GoPro cameras on the plane – or if they fall off and cause damage – it can cost house, home and any hope of future solvency. Therefore: Think about whether it’s worth the risk to put a small film on Facebook.

Watch out for wild life when landing

Printed with permission from Gary Clark see more on www.swamp.com.au