For decades pilots have been dreaming about parking their private airplane on the driveway. In the US this dream came through for thousands of pilots who chose to settle in one of the more than 500 airparks or fly-in communities that are built in the US. The first airpark in Sweden was not a reality until 2006 when Siljan AirPark – the first airpark of northern Europe – was established. In the picturesque village Siljansnäs in the county of Dalarna, 12 kilometres west of Leksand a multinational community of flying enthusiasts has emerged. But not only that: even a museum with a flying theatre with real airplanes is being developed. 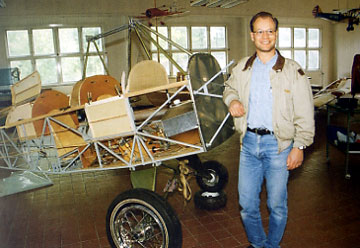 The main thread in what is being done has been social responsibility where major parts of the activity is developed from different types of social projects like for instance building small aircrafts with young people tired of going to school. During the 90’ies Carl Rönn was well known as the guy from Tullinge who made youngsters who were tired of going to school go back to school by building airplanes together. During the 2nd half of the decade Carl Rönn initiated a project where he was to take care of this group of youngsters in the region with his airplane building project. The young people were forced to learn math, English, Swedish and other key subjects in order to be able to build an airplane. In that way motivation to study these subjects increased rapidly. The airplane in the project built by the youngsters was a Fisher Celebrity – designed to look like a classic biplane from the twenties. About 2 years after the construction work started the plane actually flew, a great day for all the involved persons. After this success Carl Rönn tasted blood and wanted to continue working with the idea. Unfortunately a political resolution closed down Tullinge Airfield and Carl was forced to find another base to work from. It was not long, however, before he was offered the chance of relocating his activity to the county of Dalarna and start a similar but larger project in collaboration with the Siljansnäs Flying club.

The work started in 2001 and the central goal was the building of a flying theatre where all the oldtimer airplanes that where being built in all the social projects around Dalarna were to operate and to be part of the performances. Carl kept working with different types of social projects like the one with the school fatigued young people, primarily to finance building the flying circus but also to operate it in the future. Only a few days after his arrival in Siljansnäs Carl Rönn was also eagerly sketching on Siljan AirPark – a unique area including arena, scenery, restaurant, office space and the flying club. The vision also included a flying community, which after numerous re-drawings comprised 45 plots all connected to the airstrip. The revenue from selling plots financed the necessary expenses for establishing electricity, water, sewerage, roads, asphalt runway and all the different investments needed to transform the forest into a village.

The first proposed layout was presented in 2003 when the formal detail plan and legal work started as well as securing land and marketing the idea. Almost all plots where sold by december 2005, and the actual work could start with cutting down trees, making roads and excavating for water and electricity. The asphalt runway was opened by midsummer 2006 and the very first house construction commenced already in august. The Siljan AirPark Homeowner Association was formed in November 2006 at which point it took over the work of developing the Airpark village.
In august 2009 the AirPark was formally inaugurated after the final work with the taxiways had been completed.