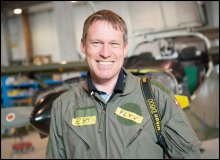 Rune Balle, chief editor of the Danish aviation magazine FLYV, plans to visit Siljan Airpark in the week-end October 2nd till 4th. The visit should result in a feature article in FLYV about our beautiful airpark. So if you haven’t made plans for this particular week-end yet why not spend it in Siljan Airpark and show Rune a living and active airpark? And also: it is mushroom season!!

Besides being the chief editor of FLYV Rune Balle runs Samsoe Airfield in Denmark.  He has indeed done a lot of interesting things on his rather unusual carreer way. Below is a clip from his linked in profile: