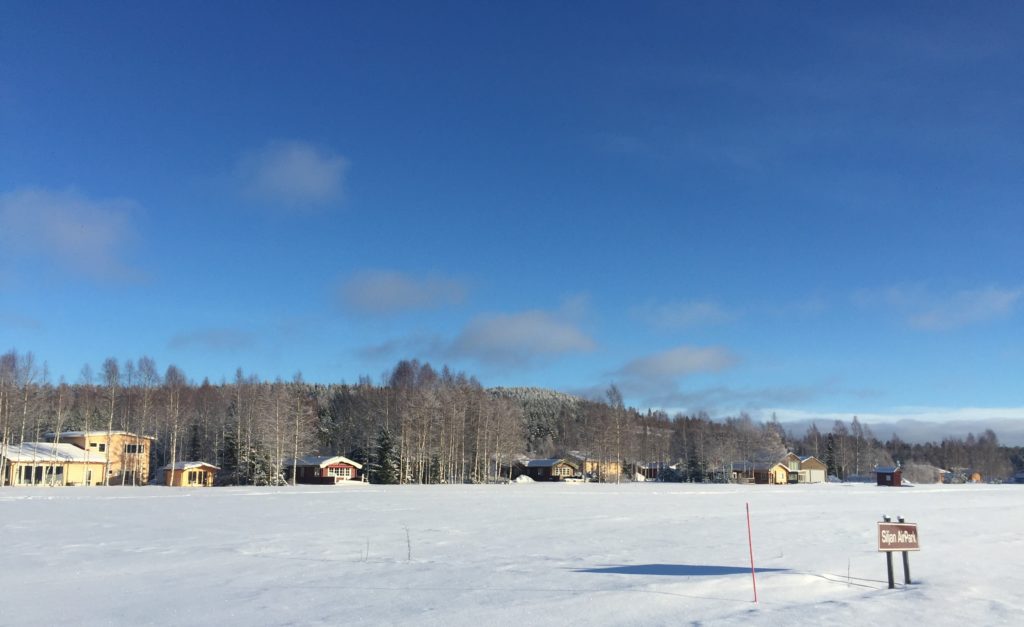 It has been a while, admitted. Due to circumstances beyond my control time passed and no newsletter was produced. I regret that but will attempt to make up for it, starting with all the best wishes for A Happy New Year to all Siljan Airpark inhabitants and their dear ones. This year it looks like we are having a real Dalecarlian winter with snow and low temperatures, creating perfect conditions for skiing in the woods as well as on the frozen lakes and waters. Nothing compares to sliding through the silent white powdered woods and come out at the edge of the woods in sparkling sun and glistening snow, to continue in a snow scooter track on the lake, find the winter deserted piers, unpack the hot bottle with cacao and a “smörgås”. This is where one of my friends would say: Nu är livet rättvist!

The mailbox stand is suffering from weather and wind. When it is raining and windy the mail gets soaked, and heavy gusts may cause the lids to open and the mail fly all over the place and in worst case disappear! Not good if you just won a lotto prize – or the opposite. The stand needs to be finished with a sturdy roof, and if any member has a suggestion to how this should be done please come forward.

The road has now been repaired and DalaFrakt seems to have done a very decent job. Now we have to take good care of the road which implies driving carefully i.e. slowly – not more than 30km/hour all the way to the farthest end of the airpark. That way the surface will last longer and we will not have to allocate funds for repair in the nearest future.

Our old pain in the neck – the garbage cans. The bins are very often over filled, the garbage is not sorted properly, and bulky garbage is not taken to the Företagshuset as much as it could be and thus save space in our bins. In spite of numerous oprop in this publication and otherwise it is still an issue. Also unauthorized use of the bins is suspected, and therefore a webcamera and a sign will be put up shortly. Cartoonist Gary Clark has another solution to the problem……seems a bit radical, tho’…

The row of hangars and cabins along the north end of Vindmyrevägen is now a pretty sight – all red with white corners. Well done, Fredrik and Maria, with the final layer of paint on the old hangar. 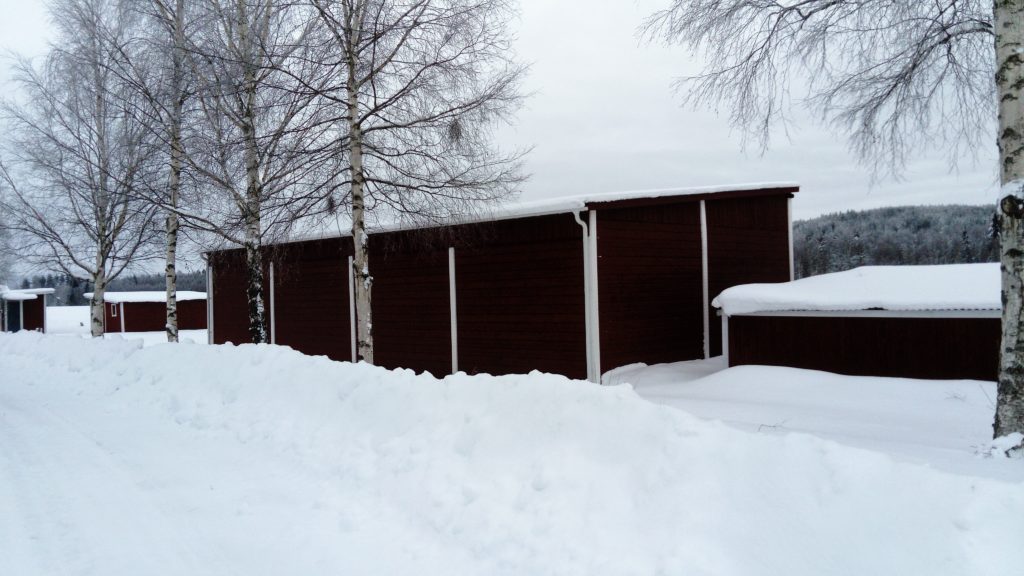 Since some years back Klaus and Sissel have rooted an old Portuguese tradition in Siljan Airpark by serving something salty on a cold and gloomy November night and invited whoever was present in the airpark at that time of the year, and according to the photos that always accompany this event it picture a cosy and jolly get together at Klaus and Sissel.

Wikipedia tells us the following about this delicacy: Salt cod has been produced for at least 500 years, since the time of the European discoveries of the New World. Before refrigeration, there was a need to preserve the cod; drying and salting are ancient techniques to preserve nutrients and the process makes the cod tastier. More importantly, fish low in oils and fats allow for the drying and preservation process to occur: oils and fats prevent the salt water from preserving the fish. Cod fish have very low levels of oils, and most is located in the guts. Portuguese, Norman, Breton, and English fisherman were the first to adopt the salt-based curing technique from Basque fishermen in Newfoundland near the cod-rich Grand Banks by the late 1400s. By the 1700s, salted cod had become a staple food for ordinary Portuguese people and by upper levels of Portuguese society. With 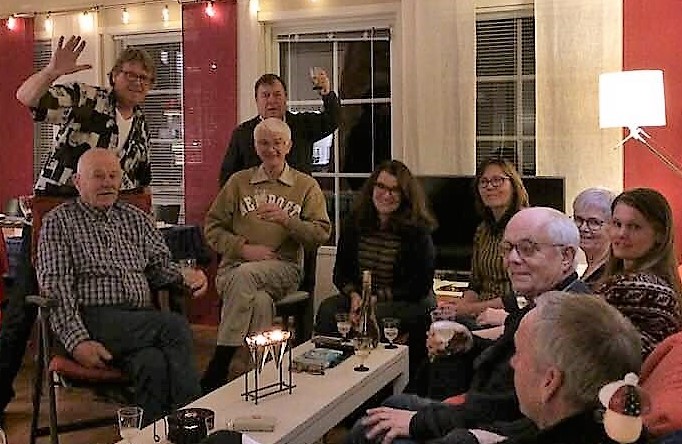 the advancements in freezing and transportation in the 1900s, salted cod from North America declined and Iceland and Norway became the major supplier of the salted fish to Portuguese markets. During this time bacalhau was a cheap source of protein and frequently consumed. Thus, bacalhau became a staple of the Portuguese cuisine, nicknamed Fiel amigo (loyal friend).

New kitchen. Thanks to all generous donations and hard work from members of the flying club a “new” kitchen has been installed in the clubhouse. More space on the kitchen tables, gone are drawers that fall off their gliders with knives, forks and spoons spread all over the floor but stay where they are supposed to be. The old cupboard in the corner which was constructed in a way that prevented people over 60 to get anything out of it has been replaced with

a – carrousel! Awesome! The old power consuming fridge and freezer has been replaced by a super modern combined fridge and freeze, which takes up half the space, but contains just as much as the old one, tha

nks to Solvej and Sven Atterhed who donated the

necessary amount of money for this asset. Now the old freezer is on retirement until Kräftis where it will serve as extra capacity and replace the old cooler and its unstable closing mechanism.

From the world around us

Global Data Protection Regulation (GDPR) will be enforced on May 25th 2018. It requires documentation by associations e.g. samfällighetsföreninger created through a “lantmäteriförrätning”- of which searchable personal identification data that are collected by the association in a register – for example a member list – how data are collected, how they are stored, and how they are being used. The documentation shall be available for inspection on request by the authorities. Besides name, address, property id (fastighetsbeteckning), and telephone number no personal identification marker can be collected without written consent from the registered subject unless there is a national law supporting this as for instance in case of the debit list and the voting list.

These restrictions also go for a website and a mailbox connected to the association. Also the terms “right to be forgotten” and “right to access” are new. Any member can request personal data erased from the registers kept by the association as long as it does not interfere with the national laws.

New is also the fact that breach of this regulation can lead to fines.

In our case this means we shall have to collect written consent from all Siljan Airpark Samfällighetsförening members to use their e-mail address going forward.

More details can be found many places on the internet, for instance this website https://www.eugdpr.org/eugdpr.org.html

He only weighs 14 grams but none the less he flew 7000km, from northern China to northern Denmark, where he was trapped in a bird counter’s net on Christmas Eve. What a Christmas present for the bird watcher! A Grey finch certainly knows how to stretch the fuel!

An issue that every pilot – and basically everybody else should study

Going somewhere next summer? Iceland, maybe? Watch this video and you are hooked! inspiration for next summer’s flight

printed with permission from Gary Clark. See more on www.swamp.com.au