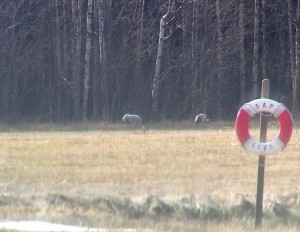 They are here now! The most sure sign that winter is over: the cranes! This couple was caught on film/disk by Ingmar Lind on March 29th. It is so comforting to see that they are “back in place”. They are also foreboding the coming season with hopefully a lot of flying, da capo of Siljansnäs Glide-in on July 2nd which has got a high  number of “likes” on its facebook profile, midsummer, celebration of the 10th birthday of the asphalt runway on July 23rd, Kräftis second Saturday in August, and all the other spontaneous get-togethers and improvised socializing that take place in Siljan AirPark when the warm season invites us to spend the days out of doors and the evenings round the barbecue on the terrace while the sunsets again and again make us drop the jaw.

An ordinary board meeting was held on March 6th in Siljan AirPark. Two members participated via skype, and that worked so well that this can be repeated at future meetings. It is always a problem with board members spread over geographical area involving more countries. But this worked!

Main issues as you have already noted from the minutes published on the Forum not long ago. We are still looking forward to see an agreement with some entrepreneur to fix taxiway edges and road. The projects of illumination, asphalt on the roads, and runway lights are still under discussion, and so are the common plots and the area around the fire pond. All projects will be addressed at the annual meeting.

An undisputed choice for a winner of our photo-contest 2016. The theme for the contest was as you may recall My best aviation photo 2015. And the winner is Russell Myles here piloting the aircraft which created this interesting 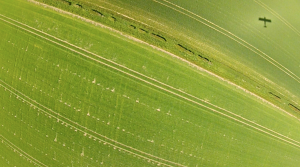 shadow namely his Eindecker on its first patrol 2016 after winter maintenance. Congratulations, Russell, and thank you for your contribution to our contest.

And here is the editor’s disclosure of the sad truth: Not only is Russell’s contribution the best and the winning – it is also the only one!  Almost. Only one more photo arrived and will be disclosed later. Therefore, dear readers, the editorial board is unable to redeem the promise of continuously bringing the contributions during the year 2016 for everyone to enjoy. This is what is named: due to circumstances beyond our control etc. etc. Sorry about that, folks. The editor was obviously totally mistaken about what occupies the mind of a pilot and aircraft owner.  Maybe another time?

Why are some pilots fascinated by flying these old cans? Read this and gain more insight in just why. Seems to be a must to understand just a little bit of it when being part of an airpark with a museum for oldies and goodies in the air. Note one of the comments: Given that most of the GA fleet are 40 or more years old, aren’t most of them antiques???

But this article is about the really old ones, the canvas-and-wood-thing and some thin tin box material as well. Enjoy even the wonderful pictures in the article. Some of the pictured aircrafts are from Old Rhinebeck, the place that inspired our Carl Rönn to build airpark, museum, and Flying Circus.

Mt. SAPS almost looks like a dump now L why don’t we agree upon leaving surplus material on the back side not facing either the road or the village. There is plenty of space if you turn 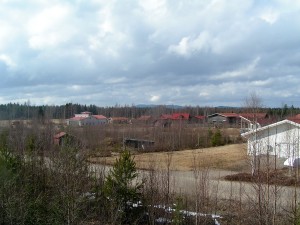 LEFT when you have entered the “dumping-area”. This way we may fulfil the dream of a vantage point on the top of Mt SAPS maybe even with a picnic table or grill place. Because there is a very nice view from there, if you enlarge the picture you will see Gesunda berget in the background, the blue, blue mountains of Dalarna.

RWY 14/32 is turning ten and still looks good – well a minor make over with a bucket of paint on the numbers wouldn’t hurt, so that will be the birthday present for the young lady. But celebration calls for a party, and therefore a couple of party starving members suggested that a party be thrown in honour of the birthday child. On Saturday 23rd of July something will happen, most likely on the terrace at the clubhouse! There will be food and drink, and like we did when finishing the great work around the fire pond a “joint venture” (Dutch treat) dinner is suggested: that means that meat will be provided for but what you eat with the meat you bring yourself – and share it with your neighbours! We have the privilege of having 11 nations presented in our airpark so theoretically we would be able to make a buffet with a genuinely international twist!! And that also goes for desserts.  Find the dessert you know is always served at birthdays in your home town.

More details will come later, and ideas and suggestions are most welcome!! 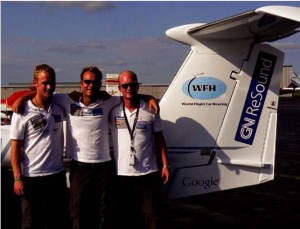 along with two friends – one was airpark member Henrik Ejderholm –  circumnavigated the globe in a flight for focus on and attention to opportunities rather than limitations when hearing impaired. An accomplishment that gave Johan the outstanding nomination of Pilot of the Year.

Review this extraordinary flight by clicking on the headline, which will bring you to the face book profile.

New resident Russell Myles has written an article about Siljan Air Park which has been accepted and will be published in the early summer. It will appear in “Instrument Pilot” , a magazine that is distributed to members of PPL/IR Europe. This organisation  “is open to any pilot interested in the operation of light aircraft under IFR in Europe”.  You can check out previous copies of the magazine at their website www.pplir.org<http://www.pplir.org> , which also has lots of information about flying IFR. Russell says membership is well worth the small yearly fee. Members come from all over Europe and are the sort of people who may consider an Air Park house as a second home, so hopefully the article will bring some interest in our beautiful Air Park.

Thank you, Russell, PR-activity is very much welcome as there is a number of plot owners who have decided to sell. The plots for sale and the contact information is available on our home page www.siljanairpark.se under the Village > plots.

Or maybe your editor was not totally mistaken

A letter came to the editor containing a wonderful story about why you have your own airplane. Should you buy or rent a plane? Here is a beautiful story from a Beech pilot that might answer that question:

I have read many posts on the web site from members and on MMAIL who are thinking about owning their own aircraft and looking for ways to offset the cost of the ownership. I have heard many reasons for and against ownership. Why buy an aircraft? It’s cheaper to rent and you do not have all the hassle with maintenance, fuel and insurance. Well, here is a little story that I think explains it all as to why I own my own airplane….Read more

We received a reques

t: what is it like to fly GA in Sweden? Are there any pitfalls?

Printed with permission from Gary Clarke, see more on www.swamp.com.au

See you at the annual general meeting in SAPS on April 30th 2016 at 1:00pm in the flying club house