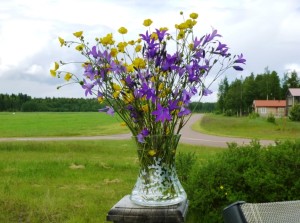 Siljan AirPark summer, most beautiful and lush time of the year. And not far away, at least not for pilots, really . This season is the time of buzzing activity in Siljan AirPark. People are outdoors, and in the evenings the sound of model planes and the special barbecue aroma are characteristics of the atmosphere in this great airpark. Midsummer is behind us, and a long hopefully warm season is in front of us. This coming week-end the flying club is having its very first glide-in. If weather permits many gliders are expected to fill the airspace above Siljan AirPark with their elegant exercises.

As you may have seen in the local news or on our Forum one of the airparkers has become quite a name this spring. Knut Hoffmann

made the long flight from Arkansas to Siljan AirPark in his newly acquired Cessna Cardinal, the very first one off the assembly line, together with a professional pilot friend. The flight took almost a week, and airborne were the two in the “bird” for 42 hours! Knut also

made a video and placed it on his face-book page. This was really an accomplishment, and judging from Knut’s facial expression on all the pictures and videos he enjoyed every single minute of it!! Well done, Knut and your PIC. Above Knut is landing in Siljan AirPark, the new home of N220IY. Building permit for enlarging the hangar is acquired and soon we shall see the walls tremble and move.

This spring six airparkers grabbed an invitation from Ridge Landing Airpark in Florida and paid them a visit. Below you will see the first half of this exciting visit. The author is Christer Wretlind, one of the participants. Photos are also from Christer.

Why we did it

Some of us have been thinking how it works with an airpark in USA. They have more than 500 of them and there must be something we can learn from them to introduce in our Siljan Airpark.  Back in 2013 I started to correspond with mr John Fazzini who just was starting a new airpark in the middle of Florida called Ridge Landing Airpark.  After some contacts I visited his booth in Air Venture in Oshkosh end of July 2014.  He was presenting his airpark to the US public in one of the halls at Sun’n Fun exhibition fair. We decided I should come back spring 2015 hopefully with a group of people from our own airpark in order to study how an airpark in US works. I was promised to rent his showhouse for two weeks.

Because we were not normal tourists we had to apply for a special visa at the US Embassy in Stockholm.  Because we were going to rent airplanes we also had to apply for a temporary US pilot license. The visa was necessary because of our planned flight to Bahamas.  All these applications took a long time and did also cost a lot of money.  I did the same procedure 20 years ago and at that time everything could be done at an US airplane rental company just by walking in and show the Swedish pilot certificate. Done in 15 minutes and no cost at all.  9/11  changed all that.  When we arrived to Florida we had to go to a an official FAA flight examiner in Tampa and go threw another hearing why we were visiting US. It took almost a whole day for us and we had to pay more money to the FAA guy. 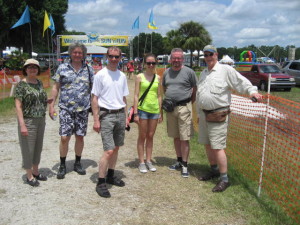 The group from Siljan Airpark consisted of Samo Kenda, Ajda Kenda, Dan Marttinen, Eva Lindberg, Sven Jerlhagen and myself Christer Wretlind. Because Sun’n Fun has occupied most of the hotel rooms around Lakeland and also the showhouse at Ridge Landing Airpark we had for the first 4 nights booked a big house in Clermont near Orlando, about one hour drive from Sun’n Fun and only 15 minutes from Disney World.  It was a very nice villa with good space for all of us. 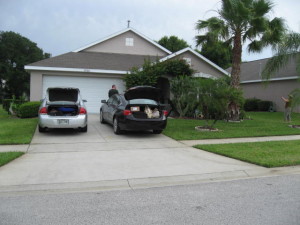 The private swimming pool was used immediately in the warm weather with more than 30 degrees C. We arrived late on a Thursday and the following days we visited Sun’n Fun  and some of us also Disney World. Sun’n Fun airshow and exhibition is said to be the second largest in the world with about 4000 visiting airplanes during the week. Every possible producer of aircrafts and parts were represented. Each afternoon between  2 and 5 o’clock they had an airshow.  After visiting it during many years one could note that it gets smaller and smaller for each year. It is not only Europe and Sweden who has problem with the interest for small airplanes. Air Venture in Oshkosh is still by far the number one air show in the world with more than 10.000 airplanes landing during their last week in July every year.

very nice showhouse with of course a private swimming pool and lot of space for our group. 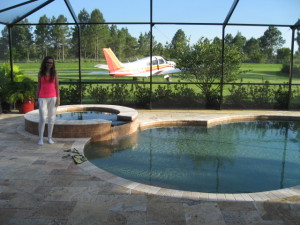 And of course  with access to the 1000 m concrete airstrip. The airpark was in a starting phase, and of the total of 99 plots about 25 were sold and about 5 of them had houses built on them.  Airpark had a big fence around the whole area and the gate could only be opened with a personal key card. The whole airpark with its runway and taxiways and water and sewage system was already built and ready to use.  All plots were ready to build on without doing anything more than building an airplane entrance to the taxiway in front of the house and just to put a house and hangar down at the plot.  Taxiways were of grass and the separate car roads were done with concrete. Everything very nice and comfortable done.  On the minus side was that distance to next village with shops about 5 km away.

(to be continued in SAP News 6)

A souvenir brought back from Sun’n Fun is now showing us the wind direction visible for everyone.

The predecessor lasted for three years. It is a hard job to be windsock in Scandinavia, where the wind is blowing – at times it seems incessantly! BUT in Siljan AirPark it very often calms down when the sun sets and we have those marvellous evenings that are a dream for model plane pilots. Come and see for yourself. If you choose a Wednesday night the barbecue in the club house is on and you are most welcome to bring your steak, sausage, hamburger, fish, veggies or whatever you prefer and take part in our nice grill sessions.

At last somebody took the initiative and put up a sign long yearned for. 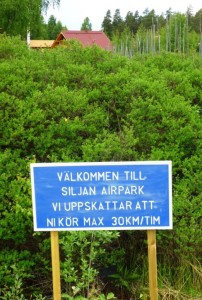 If this is respected we might even have our road also for a longer period of time before main refurbishment is needed. As it is now the many potholes are extremely annoying. But the expense for scraping and new surface layer turns out to exceed the allocated amount of money on the budget. So we shall have to make some more space in the budget for 2017.

Trees are being cut down letting in the sunlight into the forest, 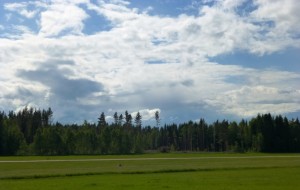 that is nice…although we have no influence upon it we enjoy the result….

And herbs are again planted to please eyes and palates … that is also nice. .. 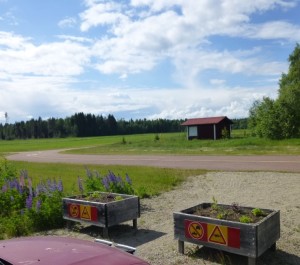 A number of small and big things are done to enhance the aesthetics in our airpark..

One job still needs to be done namely making the common plot look more tidy and kept than it does right now.

Hopefully an acceptable solution will be found soon

A month ago all of a sudden a large group of German planes landed in Siljan AirPark  on their way to North Cape! A lively day at ESVS. If you are lucky this is what you may catch when you look into the 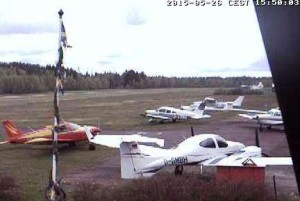 And in another corner somebody else visited for 50 minutes

Our new website is constantly under refinement. Many ideas and suggestions have reached the editors, and during the summer the suggestions will be examined and attempted to be included. The editors’ suggestions will then be presented to the board who shall make the final decisions.

As you can see there are room for comments on most pages which means that you can take part in the decisions as to what and how our website should communicate. The editors highly welcome and appreciate this support.

How to edit the House page so that you can update your own house/plot will be solved and you will be notified. An ambition is that contact data to house owners should be available for more information about house, building, etc. Visitors to the website might find it interesting to be informed about the conditions for building in Siljan AirPark .

The Forum is working just as the “old one”. Use it! We also hope that you visit the face book page Siljan Airpark now and then. Interesting and entertaining posts are made there.

….and somebody has to fill in for you while you are on vacation

Printed with permission from Gary Clark. See more on  www.swamp.com.au