Something has changed in the airpark, something is different, something is missing. It took a couple of days to realize what we missed. The sound of trumpeting cranes at 2am!! One lonely crane occasionally walks the strip and the safety zones, but never more than one. In optimistic moments the guess is that one parents is taking care of the young one, cranes being very shy and their young ones vulnerable never leave them unguarded. A less optimistic view implies that the cranes have left our premises and prefer Olsnäs Bay. Well, you can’t win them all but if this is the case it is a great loss to all of us who can remember up till 25 cranes grazing on the strip and trumpeting greetings as well as warnings to passing relatives. And everything is a little delayed this summer, everybody talks about it and there is nothing really one can do about it, the strawberries for one thing and SAPnews for another. (Just trying to find an acceptable excuse for the fact that SAPnews no 6 appears mid-July instead of June)

Flying in Florida 2015, (cont’d from SAPnews 5, text and photos by Christer Wretlind)

Why we did it

Some of us have been thinking how it works with an airpark in USA. They have more than 500 of them and there must be something we can learn from them to introduce in our Siljan Airpark. 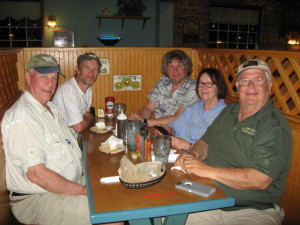 Back in 2013 I started to correspond with mr John Fazzini (guy with green polo to the right) who just was starting a new airpark in the middle of Florida called Ridge Landing Airpark.  After some contacts I visited his booth in Air Venture in Oshkosh end of July 2014.  He was presenting his airpark to the US public in one of the halls at Sun’n Fun exhibition fair. We decided I should come back spring 2015 hopefully with a group of people from our own airpark in order to study how an airpark in US works. 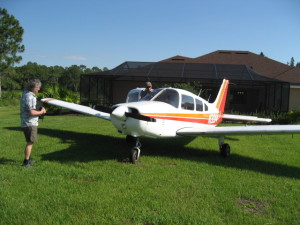 Next day we went to a nearby airport where we had preliminary booked a Cirrus SR22 and one Piper Arrow from the local airplane rental company.  We were checked out by a flight instructor. The hired airplanes were a big disappointment. Because of a lot of failures on the planes we could not accept to rent them.  Those failures should have grounded the planes if we had been I Sweden.  Samo Kenda was especially disappointed because he had looked forward to fly exactly the same plane as he flies in Europe – the Cirrus SR22.  But the plane was in such a bad state that he refused to rent it.  After a lot of discussed alternatives we finally could rent a tired Piper Warrior who only ran on 3½ cylinders.  That meant we had to skip the flying trip to Bahamas, and when visiting different places around in Florida ½ of our group had to go there with our rented car and ½ of us could fly there. But we saw a lot of Florida from that lazy Warrior doing at the most 100 kts. Really easy flying VFR in Florida and coming to an airport we only had to report on the radio we wanted to land and immediately we got instructions for the approach. Such things as entry points around the airport doesn’t exist in Florida.  Heavy or low traffic – we were always welcome to land.

Among other destinations we visited Piper factory in Very Beach and joined an interesting factory tour, Kennedy Space center with an airport only 6 kms away,   Key West closest point to Cuba, Jumbolair airpark with John 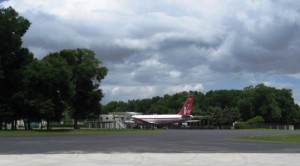 Travoltas Boing 707 sticking out of his hangar. That airpark only accepts jets to be based there but even that we were very well receive d by the owner of the airpark with our small Warrior.  We also visited an old airpark with more than 200 plots called Leeward Air Ranch close to Ocala.  We were invited by a friend of mine and got a very interesting tour around the airpark. We also planned to visit Spruce Creek Fly In Community close to Daytona Beach which is the biggest airpark in the world with more than 700 plots.  But they wanted 500 USD to receive us and give us information about the airpark and that visit was therefore rejected. The biggest difference between Siljan Airpark and US airparks is that in US they live permanently in the airpark houses but in Siljan Airpark there are almost only weekend or summer houses.

One of the most interesting visits was Kissimmee Warbird Museum which recently has been taken over by a Swede – Thom Richard. He has been in the US for more than 20 years and has established a race section in his museum. He races both in the small formula one class and in the unlimited class. He won the formula one class race in Tunisia couple of weeks ago which is part of a world series. Next race is in Barcelona on July 27-28 and final is in September in Reno, USA. But his most exciting project is a P51 Mustang with 3200 hp which they now are trimming up to 4.000 hp. The airplane is called Precious Metal and they will try to win the unlimited class at Reno later this year. Thom speaks fluently Swedish and he told jus all about  his future race plans.

What did we learn

After 2 weeks in exciting Florida we went back to Europe May 7th from Orlando with Norwegian direct to Oslo. Did we learn anything? Actually not very much talking about details. In Siljan Airpark we are working more or less in the same way as they do in US. They run their airparks with kind of a board with plot members that decides all the rules for the airpark. And those rules seem to be even more than we have In Siljan Airpark. The owner keeps it fresh and cuts the grass everywhere all the time.  He takes care of the small lakes with big birds in them (and maybe alligators because they are everywhere where it is water).  We are always very well come back to Ridge Landing Airpark and its owner John Fazzini.  It is kind of memory for life to spend a couple of weeks there flying around the state – but with a better airplane than we had.

The plotmap has changed a little bit again. Plot B4 now carries Union Jack, and Russel and Brenda Myles from Scotland will soon be moving in. Plot X15 – one of the most attractive locations in the airpark – now has a for sale – sign on it. Plots A21, B11, B6, C11, C25, and Y9 are still for sale. By the end of this week Rune Balle 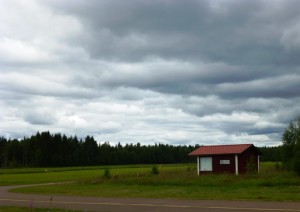 editor of the Danish flight magazine FLYV will be visiting the airpark, and he has promised to produce an article about the airpark. At least two of our present plot owners became interested in this area when they read an article about Siljansnäs, the flying club, and the beautiful surroundings 10 years ago, so why not try this type of marketing once again now 10 years later? 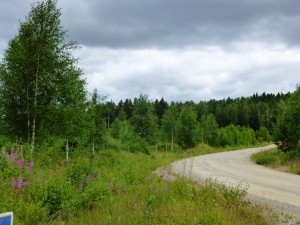 Most frequent quote by Ingmar Lind: “one picture says more than a hundred words”. The unkept plots along Vindmyrevägen are approaching forest-like conditions. Admittet – a more pleasant sight for the eye than a bare and naked ground, but in fact also shielding the view over the airpark for the neighbours. So which do you prefer?

Heaps of gravel and sand will soon be loaded into the pot-holes in the roads. Good, because the 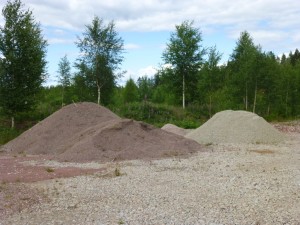 feeling of rattling bolts and mutters in your car when passing over these ruffled parts of the road reminds you of coming bills from your mechanic. Never low before but potentially rapidly increasing when your poor vehicle is exposed to this ordeal several times a day.

He came all the way from Mid-Germany in his little home-build Savage Amphibia. 10 hours behind the stick, and two days later st ill sore between his shoulder blades, he told us, as due to the load in front from the floats the plane has to be held nose-up manually which means the stick in your stomach the whole way. 10 hours. No wonder a muscle or two makes itself heard of! And now D-ERHJ is part of the fleet in Siljan Airpark and participating in the fly-by on Siljansnäs Day July 25th .Don’t miss that! Congratulations to your accomplishment, Henner Jud. 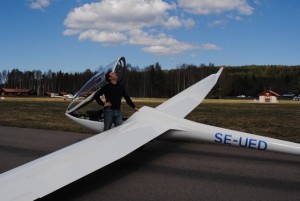 in SE-XXX watched the magnificent dare devils and their flying machines violating the laws of gravity to maximum.

New patio at the clubhouse

The old terrace at the clubhouse has undergone a thorough renovation, a tremendous job lead by 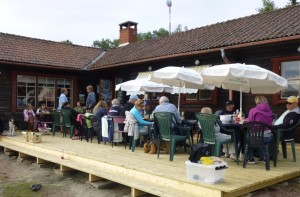 Hans Björkman willingly assisted by Birgitta and a handful of members. Siljansnäs Sågverk gave us a good price for the wood, Stuss Bengt with the gravel and sand, machinery was generously lend from Mats Persson, Tommy Kerstis and Åke Stormats who also drove his tractor transporting sand to the tip, and a couple of members sponsored with cash. 12 chairs were found at a reasonable price on www.blocket.se.  Thanks to everyone who made this possible.

This patio will definitely come in very handy now with Kräftstjärtsvängen right around the corner. Your flying club is already in the starting hole of preparations for this big annual event which is the economic foundation AND prerequisite for the existence of Siljansnäs Flygklubb. And like every year the club appeals to members for help, and never did that in vain. The plot owners of Siljan Airpark have always been very helpful which is much appreciated from the group that holds the reins along with Anders Löfvenborg, al-productions, who also was the captain 2013 and 2014.

Ordinary board meeting will be held August 2nd at Byrholts, in Siljan Airpark. 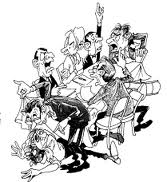 The agenda is  available on Member Forum > Meetings, Protocols and Documents > Styrelsemöten/Boardmeetings.

Why is it that SAPnews production no more flows the way it did just a few years ago? 2011 we had 16 issues, 2012 delivered 15 issues, but the last three years barely made 12 issues each.

Could it be that the time of pioneer-spirit is over and replaced by the time of consolidation within your own premises, a fully natural development? A pause in building activity has arrived, and this type of news consequently decrease. Reports and letters from readers are traditionally scarce, a well known fact among editors, and stories of members’ accomplishments are difficult to write when you are not at the “crime-site”.

Or could it be the fact that our new homepage invites to a more frequent display of news in smaller bites in stead of five A4 pages?  Making the monthly SAPnews thus turns into a résumé of already published news, satisfactory for neither reader nor editor. To avoid internet pollution the editor has agreed with the webmaster to refrain from bringing links to this or that, some of interest some utterly trivial, when publishing on our website.

How would it be if SAPnews monthly was replaced by a frequent updating on News at our website so that news would be real news and not things that happened weeks ago? This method naturally implies that our readers visit the homepage regularly and frequently, or a feature on the website that allows a notification in your mailbox about news on the site, an option of course that requires your individual approval/subscription. Would this be an alternative to the “old” SAPnews seen from the readers’ view-point? Would you give it a thought or two and come back to me on muus@dadlnet.dk