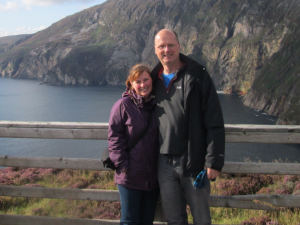 Russell Myles and Brenda Storey live in Blairgowrie in Scotland. Brenda is a freelance writer. Russell is a commercial helicopter pilot flying the Bölkow105 and EC135 for both the Police and Ambulance. He previously flew Boeing 757, 767 and Fokker F27 for the airlines after leaving the Royal Air Force. For fun he currently flies a single seat Fokker Eindecker E111 Replica (like the one in the Siljan “Flying Theatre”), and used to own a 50% scale replica P47 Thunderbolt. Now they are looking for a long distance touring aircraft to get from their home airfield of Perth (EGPT) to Siljansnäs. Brenda has always wanted a log cabin and Russell has always wanted to live on an airpark, so buying the house was an easy decision! It will be a holiday home for the moment but they want to spend more and more time at SIljan Airpark in the future. They are looking forward to meeting and getting to know everybody.

I have visited the Air Venture in Oshkosh many times and it is just amazing every time. It seems that they surpass themselves every year, and this year according 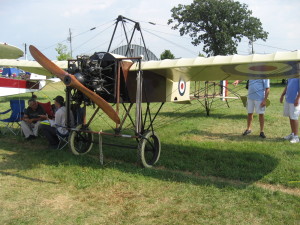 to the following report is no exception. There is just everything you can think of as private pilots, and all suppliers are there. Sun’n Fun in Florida is impressive but nothin 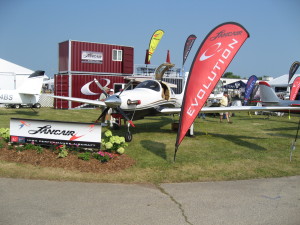 g in comparison to Oshkosh.

And unique is it that you can fly in every morning and fly out every night along with thousands of other airplanes. You get ready to land on either the first 3rd of the runway or in the middle or at the end of a parallel runway – 3 planes simultaneously. On the other runway take offs are taking place all the time. I myself have landed at Oshkosh in connection with training in a Lancair IV and it was no problem despite of 10 other planes in the pattern and instructions from the tower hammering at the speed of a machine gun.

But naturally least stressful would be going by car, and parking capacity and organization is on a very high level, you rarely queue more than15 m 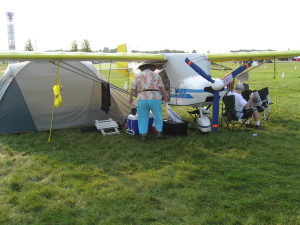 SAP News is hereby making a little propaganda to visit Oshkosh from July 25th till July 31st 2016. All Hotels in a 10-mile radius is either full or very expensive. Therefore, an alternative is to rent a house somewhere in northern Wisconsin near an airport or Airpark and fly in Oshkosh. If we get together a team of 5-10 people it will be a lot cheaper than staying in a hotel and moreover pleasant company. I definitely plan to go to Oshkosh in July 2016 and I volunteer as tour guide if there are more people who’d be interested in participating.

maybe an option for the Diehls??

Our board had an ordinary meeting on August 2nd . The minutes are published in Member Forum as usual. One main issue is still how we get in touch with plot owners who have not yet built to hear about their plans for their plot as the unexploited plots still are causing worries about the speed of growth on this latitude! Soon we have smaller forests, jungles or whatever you prefer to call them as next door neighbours in some parts of the airpark. Note that the next Labour Day is pinned to October 24th with a dinner party in the evening for all the busy people who work to make our airpark look nice and tidy.

Preliminary date for the annual meeting in SAPS 2016 is April 30th . In Sweden this night Valborgsmass Night occurs halfway between the vernal equinox and midsummer and is celebrated as the night where the witches gather at Blocksberg (Brocken) in Harzen, Germany, riding there upon a goat or a broom!!. Traditionally you light a huge bonfire (where you burn all the trash you collected during spring cleaning of house, garden and stables). You may even burn fireworks, and the following day May 1st  is a “day-off”, for many people an off day as well! The return of light is often celebrated until the light appears over the mountains with lots of good food and good beer.

aybe we should consider closing the annual meeting 2016 with a bonfire, a spit-roast and

The most boring topic to write about, read about, care about. But also a daily annoyance if it doesn’t work! After many discussions back and forth the Flying Club decided to expand the capacity during high season where many guests are in the cabins and on the flying club area, and the production of garbage is extensive. The capacity has been enlarged with two more containers one for organic waste and one for combustible. Please, help the flying club by reducing your amount of bulky garbage, take it to Hallevi, the garbage station by Företagshuset in Siljansnäs, opposite the football arena.

The 26th Kräftstjärtsväng in Siljansnäs Flygklubb August 8th was a success. The number of visitors exceeded previous years, and all food was 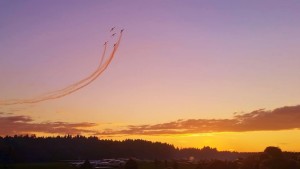 sold out. The air show was a breath taking goose pimples raising performance by Jas 39 Gripen, a presentation of Hercules and our very own glider ace Rune Leander sprinkled starlight and water on the public the way we like it. And then, ladies an gentlemen, also almost our very own RVators made a show which made Red Arrows look like Donald Duck! Not only did they give a show they also gave three training performances and a da capo at sunset. Then everyone cheered! Come back next year, please! Thanks to all who worked and helped and grilled and cooked and spoke and fixed and made this  26th Kräftis a fantastic event! And the new patio worked wonderfully! Next year we shall fix som illumination around the pation, as it actually acted as a stage for our music. Life will be easier for them and cosier for everybody if we get some lights there. See lots of pictures on our Gallery and at the Flying Club website Gallery Kräftstjärtsvängen

A community makes rules at the beginning of its existence, and after a period of time it becomes necessary to remind one another of those rules and why we made them.

We decided that motor vehicles are not allowed on the taxiways, we even had nice flower boxes made and put up very instructive signs on them and placed them in strategic places namely where roads or foot paths are crossing a taxiways. We still think that it was a sensible decision to make as tires heavier than bicycle tires implies a risk of dragging small stones and gravel onto the asphalt potentially causing damage to propellers.

Noise abatement is a matter of keeping good relations with the communities around us, and it was decided early in the process of establishing Siljan AirPark  that air traffic should not be allowed night time (10:00 pm – 06:00 am). This information never made it to the KSAK plate but it will be added at the next update this fall.

Remember Judith Woodsworth, who in 2011 visited us to make Siljan Airpark part of her field observations and eventually part of her dissertation? There is no doubt that Judiht’s work has spread the word about Siljan Airpark, and according to her letter she still thinks of us with warmth. This is what she wrote as a feed back on the editor’s appeal in last issue of SAPnews:
I love reading and seeing the photos in the Newsletter, even if its about things that have happened a while ago. But if you no longer have the time then maybe an issue every 3 months.
Also glad that there are 2 new Brits on the Airpark…. I had a lovely email from then to say that reading about Siljan in my dissertation was one of the factors that helped them decide to buy.

Not that it’s not an amazing place with amazing and friendly people. 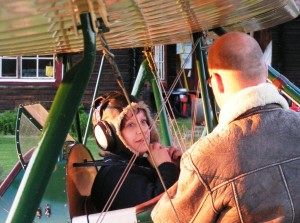 As for me…still flying and about to “bite the bullet” and get a share in something or buy something and make a syndicate around it. My daughter is about to go to Acting School for 3 years so I will have time for me now.
I’m writing theatre reviews for one of the newspapers here…. not paid but get free tickets.
And I’m now Chief Time Keeper for the Royal Aero Club’s racing team until I can get enough P1 hours to get my racing licence (well I hope to).Judith (Woodsworth)

SAPnews will appear less frequently in the future, maybe only every 2 months depending on the amount of interesting material in the in-box! Feel free to contribute with your stories, fly-outs and -ins, tips, and pictures. The right column on the News-page named Hot news will be the place for – well, hot news! You will not find a resumé of something that happened last year but rather what happened last week or shall happen next week.