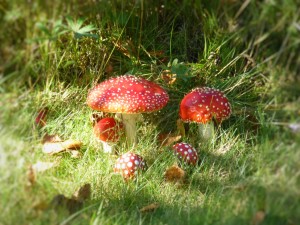 Mushroom season. Be careful. These beauties grow all over the place in Siljan Airpark. Not healthy. The legend has it that the Vikings ate them and went beserk – hence the nickname the beserks – but it is a myth, never documented. But it is not to be recommended to test whether it could have been. You get awfully sick if you eat them, really awfully, awfully. So 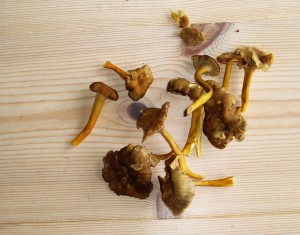 don’t. Stick to the yellow chantarelles – if you can find them!! Don’t expect the locals to reveal where to go. They get this weird blank bottomless expression in their eyes if you ask: “well, you just take the gravel road, and turn left into the woods.” That’s about what you’ll hear. Which gravel road and which woods is up to you to figure out. If you can’t find them you may succeed in finding the more common tragtkantarelle – se picture

As preparation for Labor Day October  24th Maserfrakt has inspected the vegetation along our roads. Maserfrakt will cut and clear, and on Labor Day we shall deliver muscles to clean up.

This coming week-end Siljan Airpark it was planned that Siljan Airpark be visited by Rune Balle, the chief editor of the Danish aviation magazine FLYV .

Rune plans to write a feature about the airpark, but unfortunately he was forced to cancel his visit this time. But he has set his mind upon visiting us some time. When he does be sure to be in Siljan Airpark, park your airplane in front of your house or hangar and have a chat with Rune, telling him about why you chose to invest in a plot at the most beautiful airpark in Northern Europe. Info about his plans for visiting will be announced.

There are secrets and there are well kept secrets even among hangar doors.

Reino’s hangar door never ceases to impress the spectator, at Danne and Eva’s the plywood doors have been substituted by a system of nice looking brown doors 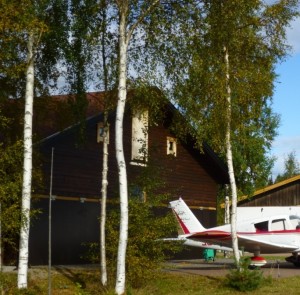 angar doors are almost ready for use. Only the electric opening system needs to be fitted. Nice! 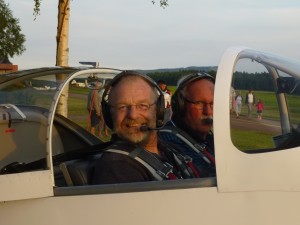 A handy man has been introduced into the airpark. A full fledged Danish carpenter Ib Olsen offers his services and talents during the summer or fall. You may inspect his work at Danne’s. Ib will be here from October 4th and the next few weeks. Ib lives in Austria, and loves flying. He is an eager model plane pilot, and this summer you may have seen him operating his Easy Star around taxiway Yankee. Rumor has it that Ib is bringing a Cessna 182 along on Sunday. He enjoyed Siljan Airpark from above along with Stig in one of the RVators. Great ride, he said. Loved the loops!!

Our webmaster Florin has updated the slide shows with a lot of new pictures from the airpark. Thanks to all who contributed and a special thank you to our new member Russel Myers who made some nice and updated shots of Siljan Airpark from above. There you can really see how the airpark is constructed with car-road and taxiway access to all plots.

Somebody left a black plastic bag filled with garbage on the deck at the garbage station. That doesn’t work, the garbage company does not take it away as it is not part of our agreement with them. Please, who ever left it there bring it to the proper container at the Företagshuset or to Leksand. 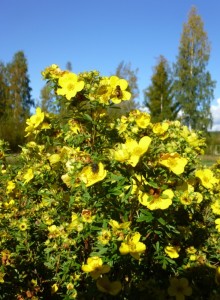 This pretty yellow bush seems to creep into the airpark and store up sunshine. It shows the first blossoms in June and keeps on blooming as long as the temperatures are above zero. Here is what the Wikipedia tells us about this sunshine bush:

From Wikipedia, the free encyclopedia Dasiphora fruticosa  is a species of hardy deciduous flowering shrub in the genus Dasiphora of the family Rosaceae, native to the cool temperate and subarctic regions of the northern hemisphere, often growing at high altitudes in mountains. Wikipedia And then they did not include the Swedish pet name Ölandstok (means something like “the idiot from Öland”)  where this name came from is a mystery. But this pretty little thing has always been connected to Siljansnäs in my mind. From our first visits to ESVS back in 1995 where we camped behind the Ölandstok he

dge at the club camping site it was part of the picture. Therefore naturally our protection against dust raised by taxiing airplanes on X-ray had to be Ölandstok. Our photographer took a walk in the airpark and prooved that Ölandstok now is connected to Siljan AirPark as well from Christer Wretlind’s impressive hedge meeting you as you enter Siljan AirPark till Rafn-Bloch’s more humble start and several editions in between all bright and beautifu

SFK held an ordinary open board meeting Saturday September 26th. You probably have received the minutes ( in Swedish with a summary in English). Head lines from the meeting include the fact that this year’s Kräftstjärtsväng gave a nice profit to the club, and the board is extended thanks to all the members who helped and worked these two days, which are crucial for the existence of the flying club. The contract with Anders and Gunilla Löfvenborg al-produktioner has been renewed for 2016; the conditions changed a bit to secure al-prod. a minimum of profit! So far they have red numbers on the bottom line from working with us for the last three years so therefore it was considered only fair to change the conditions in their favor. We need their expertise and assistance to drive this project next year as well. No one in the flying club has the resources to do this alone any more.

The job of reconstructing the TMG SE-UAC Motorfalke is proceeding although behind schedule still proceeding. New goal is to get it in the air next spring.

The date for this nice event has been set to July 2nd with July 3rd as back-up in case of bad weather conditions. The event is captained by Maria and Fredrik Pellebergs. Follow the preparations and planning on fb

For all of you who consider flying in the US 2016 we bring you just published locations for AOPA fly-ins 2016 . If you are on th

at side of the pond anyway why not divert to one of these destinations? AOPA has spread the choice of venues all over the states so that o matter where you go there should be a possible AOPA fly-in  destination within reasonable reach. Have fun – make your editor happy and send a report to SAPnews.

Board-meeting in SAPS on October 25th 10:00am in Danne’s hangar. 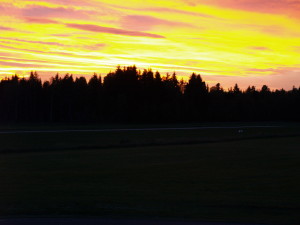 You don’t need to go to Hawaii to watch fabulous sunsets. Siljan Airpark is closer most of the time probably…