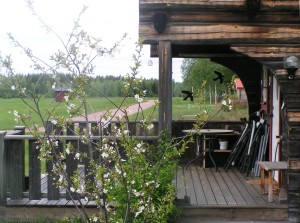 Time flies, and it has been so long since last time SAPnews was in the air that even pilots are flying. The gliders are engaged in heavy activity at the flying club, and airparkers are flying to and fro to Siljansnäs. The birch trees have green leaves, the cherry blossoms have spread their snow and the skies are high, blue and with wonderful cumulus. 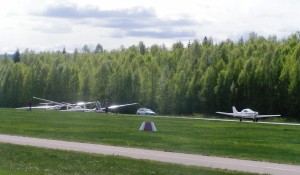 Just ask the gliders. Now Dalarne is at its peak beauty although a bit chilly – rumour has it that temperatures have dropped remarkably in the airpark. Well, they do and they come up again. The good thing about that is that all the flo 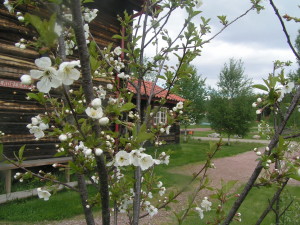 wers and blossoms last longer. We had via remote control Ingmar take a couple photos of cherry-trees to induce longing for Dalarne and Siljansnäs well known for all the cherry-trees.

Annual meeting this year was lengthier than usual, by now you will have seen the minutes on the Member Forum where the discussions on the meeting are reported. We therefore decided to move the two lectures till the dinner party. This took place in Dannes hangar. The flying club has been announced as the “party-place” but so many people had signed up for dinner that this was 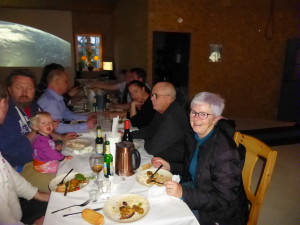 not possible!! So quick decisions were made and Dannes hangar turned into the perfect part 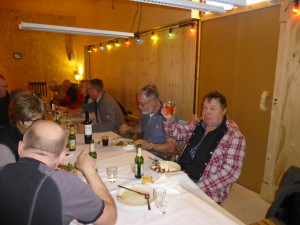 y place. Great food – lasagne, home made bread and super salads – apple pie -was served, and thanks to a previous investment by some far-sighted person the food was served on real plates!! Real forks and knives, no plastic here, no. Delicious! And to make the food swim both Flying Beer and Rulle’s wine sweetened and quenched our palates. Big thanks to all the people who made this happen, none mentioned none missed. And on the screen we enjoyed again and again the cool Russian aerobatics female pilot who cold as a fish tosses around with her 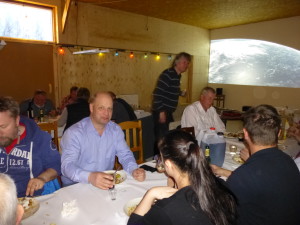 Yak, I think, challenging the laws of gravity to the extreme. Very entertaining. We are lucky in an airpark always to be able to find a place big enough to have everyone on board. Just a matter of moving an airplane or two. That’s it. Taxiway edges!! Everlasting never ending – and yet! Finally an entrepreneur was found who is willing and able to take care of that. He will be starting the work shortly and aim to be ready before Midsummers. Pipes will but thrust down or cut off depending on as I understand how far up they protrude. In any case the surface will be made so the grass cutter can run without risk of knife damage. This we have looked forward to for a long time, and finally it will be here! Thanks people on the board who finally made this happen. 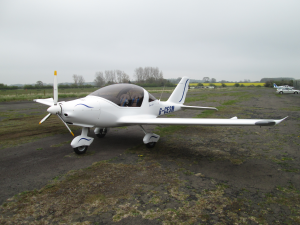 Last year a very special Cessna N2201Y made a

very spectacular entry to Siljan AirPark . All the way across the Atlantic Ocean this little single engine fought its way to Dalarne and landed on ESVS, where it has been ever since, but never had its own place to stay. No space in the owner’s hangar. The trike took up all space and did not seem to be too enthused to face sharing with an aeroplane. But the trike is not the boss on these premises, Knut is, and he decided to m 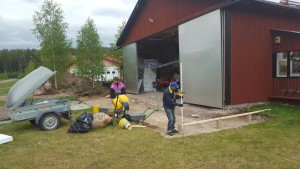 ake room for the newcomer together with the trike. Like it or not, you have to accept your room-mate, he said. So a local entrepreneur team is now expanding the trike den into a double room for magnificent flying machines.

Stack away your future worries for rain showers to spoil grill parties on the beautiful new patio at the flying club house. A generous donation from a certain airparker Christer Wretlind will soon materialize itself in a motorized blue-and white striped (the dominating colours in the logos of both Siljansnäs Flygklubb and Siljan AirPark ) awning. So leave your umbrellas at home when going to the flying club on Wednesdays.

A letter came to the editor

“I am a writer for AOPA (google AOPA Opinion Leaders Blog with my name) and I would like to dedicate one month’s post to the experience of flying in Sweden and being on the airpark, if that is possible. It all depends if someone is willing to offer a rental or not.”

The name of the sender is Garret Fisher. We googled as he said and read these lines:

Garrett Fisher is an aerial adventure photographer, having photographed some of the most rugged and wild terrain in America from his 1949 Piper PA-11. He has recently moved to Germany with the airplane, and has published six aerial photography books covering the Colorado Rockies, Wyoming, high terrain in the Southeast, and the Outer Banks, with more US and European books in the pipeline. He blogs regularly about his flights at www.garrettfisher.me.

You also know AOPA, all pilots know AOPA. Millions of pilots around the world read AOPA Pilot Magazine with the most fantastic articles. Telling about airplanes, adventures, and my favourite and always first read: Never again! I learned a lot from reading this. It is not often pilots like to tell about their mistakes and wrong decisions. The good thing was that they survived to tell their story to the rest of us to become wiser and more cautious pilots.

And Garret Fisher wants to “dedicate one months post to the experience of flying in Sweden and being on the air park”. Just think of the opportunity for Siljan Airpark to be part of Garret’s blog for a whole month. We MUST have this guy coming to Siljan AirPark . Doesn’t anyone have room to offer him? UPDATE: Garret Fisher will probably NOT be coming this summer as he is encountering mechanic trouble with his aircraft which may spoil his plans for this summer. Thanks to Danne and Eva who offered room for Garret. Hopefully next year.

Siljansnäs Hotel on Björkberget has been turned into a refugee camp. There were worries beforehand but they turned out to be completely unnecessary. The refugees are people like you and I without the luck of have been born in our quiet part of the world. They leave their homes, friends and families, culture, language, food, etc. etc., and risk their lives in pursuit of a better life under less dramatic conditions and where they can express their opinions without risking life or freedom. The people of Siljansnäs have welcomed the refugees and take good care of them. They meet a society where we take a lot of things for granted: that we are taken care of, that we have a voice that will be heard, that we do not have to accept cruelty or inhumanity from the authorities, that we can complain and make a difference as individual. We have a constitutional right to vote, and to some extent choose who we want to be our leaders. Or at least the leading politics. Because we can vote. We do not have to fear for our lives when we line up in front of the polling station. We have a right. But along with that right comes a duty to make use of this constitutional right. 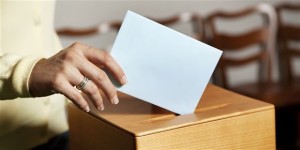 This right goes all the way through our system down to smaller communities like associations and societies. Like Siljan AirPark Samfällighet. This right gives the individual the option to express whether or not they agree or to choose between options. And it is even a right to get someone else to carry your vote on behalf of you if you are not able to attend yourself. That one should be one you know and trust will either talk on your behalf or take a certain stand for or against a specified issue by using a power of attorney signed by you.

Now, you don’t have to go far back in history when this was not an option for everyone, not even on these latitudes. When did women achieve the right to vote in Switzerland for example –? 1971! And Liechtenstein 1984!! Countries that we all consider developed and modern.

Many of the temporary inhabitants on Björkberget never had that right, and those they left behind may not have it yet for many years. So cherish this right and duty, take good care of it, and above all use it.