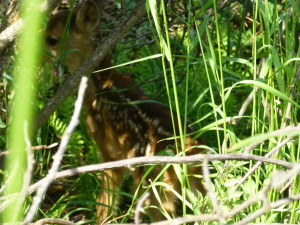 One of nature’s very vulnerable creatures – a baby fawn, only a few days old. What you may meet in nature during the early summer days and what you may know how to protect. Nature – a vulnerable and yet robust “thing” when treated the right way. In Sweden the access to nature is very generous, called Allemansrätten, may be translated to something like “right of public access”, a right that can only exist and continue if we all respect the few rules of this right to enjoy and use nature and wildlife. It can be summed up with the phrase: Don’t disturb – don’t destroy. Read more about this important right in the pamphlet linked above, launched right in the middle of the season where you just want to be outdoors as much as possible. The weather doesn’t really matter that much as long as the rain isn’t too heavy because the temperatures are so mild and the light is generous.

Action season in Siljan AirPark ! Notice one green dot disappeared and the flag changed from Union Jack till the German flag – Anna Markey sold her plot to Alexander and Antje from Frankfurt. And within amazingly short time a complete change of the plot took place – 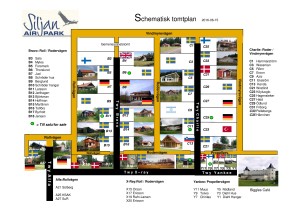 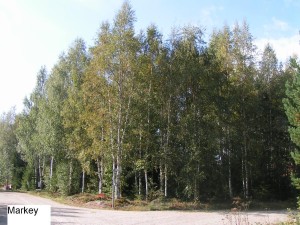 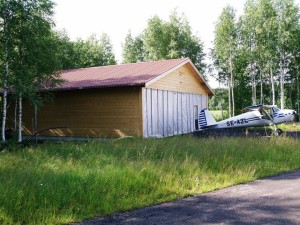 Antje, Toffe and Alexander at the temporary domicile in waiting for the permanent house to be built. And they already started drilling for geothermal heating … although Alexander seems to wish for something else … (Let them strike oil, please!)

A warm welcome to Antje and Alexander, their dog Easy and their Rally D-EDMB.

In the next issue of SAPnews they have promised to tell a bit about themselves. We look forward to that. 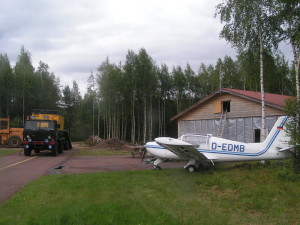 So, why not continue with all the handiwork going on in the airpark right now – and a while ago! Hans and Birgitta are making the nicest pavement in front of their hangar. It is so neat and meticulously done, any airplane would love to let her wheels roll over these nice plates and into- or out of – the cosy hangar.

Danne and Eva are going Dalecarlian, and like a few other airparkers they have encircled part of their property with this beautiful local style fence called a gärdsgård – made out of fir poles with a very special technique. You see it all over Dalarne. In the shielings this type of fence originally was made to keep the cattle out of the gardens around the houses! Danne apparently is using his to keep René’s Aztec out of Eva’s  honeysuckles! 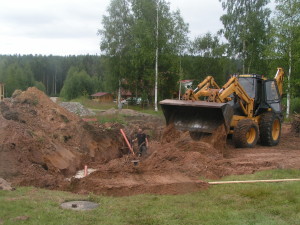 When Elin and Fredric bought the Krämer plot speculations about the future use of it were countless. One guess was a swimming pool – looks like that was a good guess judging from these pictures. The truth is that Fredrik and Elin are fighting the groundwater which has a high level in our airpark. No fun! Water has a tendency to be the boss here on this planet.

But in this case man won! The groundwater ceased to flow, the “pool” has been covered and hopefully the water will stay “down under”. Looking forward to a croquet field! 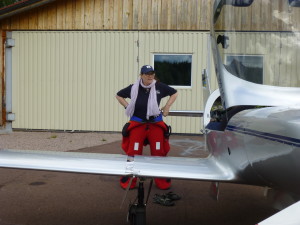 On the morning of July 11th a very long flight was initiated. Many days of preparation, and many preparations made. Sinje and Reinar took off towards Alaska, Hudson Bay, Rocky Mountains, the Aleutians, Carson City, and Oshkosh. Long way round!!. First leg ESVS to Iceland was completed with only a few obstacles such as showers and low ceiling, but they landed as planned and are spending the night there before they continue Tuesday 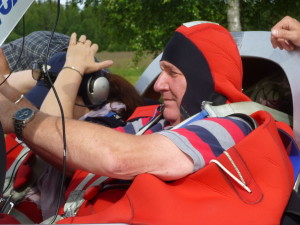 No, it is NOT Spiderman and Spiderwoman  getting ready to save the world. It is survival outfit. Good luck, SUR, and we will follow you best we can on your journey. 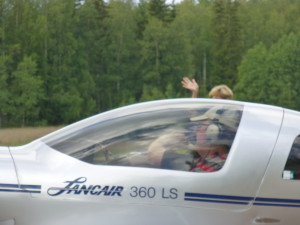 As earlier announced on Forum Fredrik Ericson offers brush up lessons. Fredrik is a certified instructor and as such can prolong your SEP license. Fredrik is not sure whether this applies to pilots with non-Swedish PPL’s but whether or not it does an hour with a certified instructor never harmed anyone!!! Just contact Fredrik if you feel that you need a brush up to knock off the rust.

By now the taxiway edges have been fixed. Levelled out and all drains, wells and pipes tugged down to the surface for the grass cutter to go over without trouble and risk of damaging the knives. Unfortunately the cutter turns out to be so worn down that it has been declared beyond repair! SAPS and the flying club must solve this problem as the grass is growing at an alarming rate.

A board decision in March foreboded a celebration of the asphalt on our runway on July 23rd. Everybody agreed that it was a good occasion for a party, and the date was set. Unfortunately other plans are preventing several board members from participating or fixing practical matters around the celebration. No one has taken the lead and time is running. The time of writing it seems unclear whether there will be a party or not. As soon as the decision is made you will be notified by e-mail.

On July 2nd and 3rd the second glide-in was held powered by Fredrik and Maria Pellebergs and Vlasta and Johan Stormats. The weather on Saturday was not ideal and therefore Sunday was included as well. 30 people included a bunch of German gliders enjoyed Maria’sbarbecue on Saturday night, and on Sunday some flying took place. Flying or not those that were there enjoyed the social meeting which is an important part of the glide-in.

The nice patio built last summer by Hans Björkman & Co now has a cover! A huge motorized awning will in the future protect us from water

from above! No need any more to rush for shelter when the heavens are opening wide. Stay where you are and enjoy the sound of raindrops on the canvas above you. What an asset to our club-house! The generous sponsor Christer Wretlind also advertises discretely for his wine-making kit Rulle’s, and just like alcohol consumption never is combined with active flying it is very often part of the hangar tales after flying. So, Christer, I take it that a lot of pilot-lies will be told under your “roof” while enjoying Rulle’s wine.

Kräftstjärtsvängen 2016 on August 13th and 14th is slowly entering the preparation phase. Al-produktioner are preparing and the flying club is also starting to persuade the members about the fact that the place to be on August 13th and 14th is in Siljansnäs Flygklubb and the thing to do on these dates is to give a hand to get this fly-in rolling and ensure the survival of the economic foundation of the flying club .

Time to consider: renewal or let it go?