November, in many countries north of equator named the dreariest month of the year. An old Roman Catholic friend of mine even named November month of the dead. People associate November with darkness, low skies, decay, depression, slowing down. But if you look at it the other way round each term even comprises positive notes: it is the time when the Scandinavian term “hygge” – cosiness – really comes to its full right, because this term is associated with candle lights, open fire, hot drinks, good books, contemplation and absorption. And therefore also the season for memories, for looking back at the months passed, wondering what we learned, whom we hurt and whom we helped. But it is also the season for preparation in terms of securing your house and plants against the bites from King Winter and preparing for next spring. You may have wrapped the sensible plants and dug down deep the tulip bulbs. That way November even becomes a month of anticipation and of life to come.

We are sad to announce that we have lost a member and a fellow pilot. Kyösti Salo passed away in October and the memorial services were held on November 12th. Kyösti and Leila own plot B3 on Rollvägen, right behind the common plot. Plans for building were progressing and building permit was also achieved.
Our deepest condolences go to Leila and the family.

Conference on the future of Siljan AirPark
October 29th this important conference was held in Danne’s hangar in the aipark. Twenty participants – plot owners, flying club members and friends and families – were gathered to take the very important discussions about how to develop Siljan AirPark. Unfortunately the planned date for the conference collided with many people’s already made appointments and thus limited participation. A suggestion was made to have the conference on the same week-end where the annual meeting takes place but at this occasion not considered an option for the conference. Fortunately the organizers have promised to publish the presentations and a summary of the discussions on our Member Forum. Some headlines and highlights, however, found their way to SAPnews.

In the aftermath of the latest annual meeting no one will doubt that ideas and interests concerning direction, speed and expense of development are pointing at very different directions. Eager attempts of persuasion have been made to promote the motion from the annual meeting and not everybody has been happy about neither the idea nor the approach. According to the agenda at the conference the three elements of the 2016-motion were to be presented and discussed in detail. What was said remains to be seen but the conclusion – not on these elements but in general – seemed to be that development in Siljan AirPark must be one thing at a time and at a pace that you may describe as making haste slowly and naturally in accordance with member- preferences. Our community is small and therefore both very strong and very vulnerable. One local man expressed this very well at an occasion recently: Development in a small community is driven by cooperation, in a large community by competition.

Another lesson learned from the turbulent annual meeting was to consider the option of handing in a motion that gives the board the assignment of investigating how a certain proposal may be financed and even include co-financing solutions, a new way of thinking.
Present at the conference was also KSAK – the Swedish pilots’ association owning the house at the most northern end of the village – and they revealed thoughts of closer co-operation with partly the airpark around a house booking system, partly the flying club. They are considering Kräftstjärtsvängen as a possible venue for the annual KSAK fly-in. But nothing is decided yet. 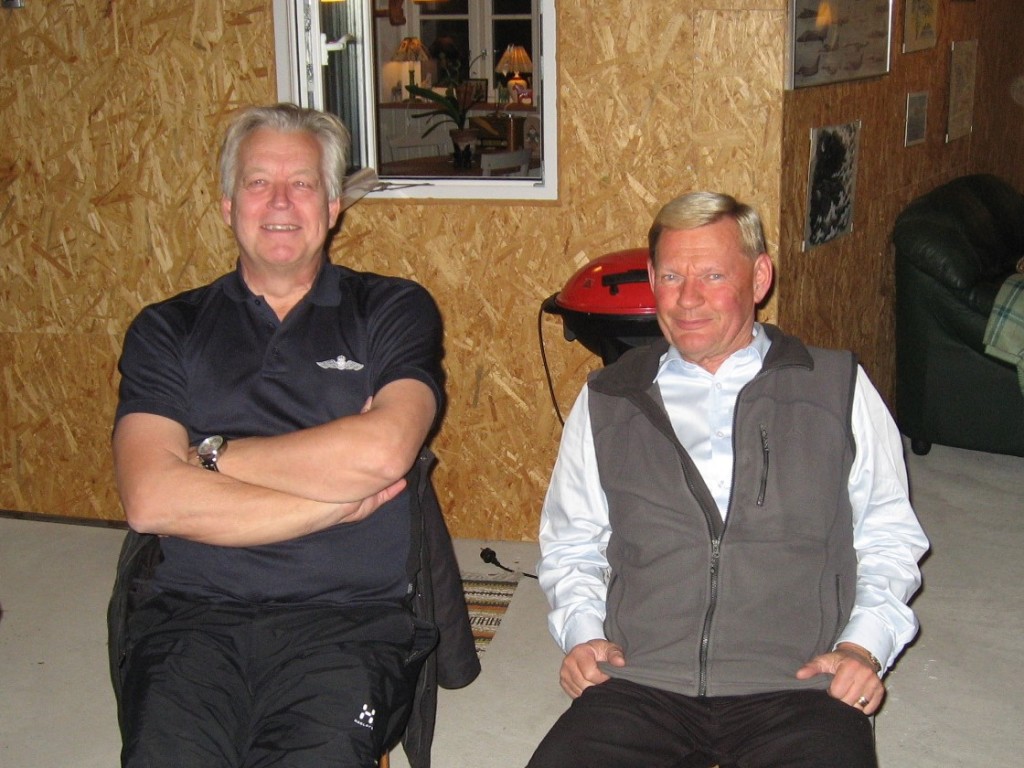 One idea launched at the conference was a “test-area” for street lights in the village before decision is made about the preferred type of lamp posts which of course requires a decision about having street lights at all.

What we do not know yet is whether the mail company insists upon the streamlined edition or the more creative variants. 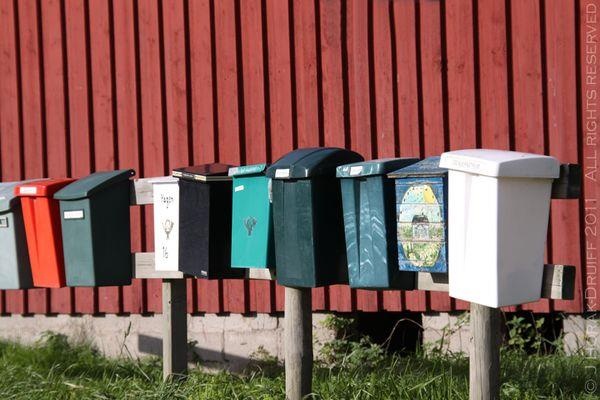 Labour Day
Preceding the Future conference a labour day was carried through. Several things needed to be done was done such as clearing ditch edges, clearing away scrub cut at an earlier occasion, and levelling the drain at the right direction at Brenda and Russell’s. Six hours of hard work for all of us who couldn’t make it that day. For that the diligent few were awarded a complimentary dinner after the conference. Well deserved!

Conference Destination Dalarne up-to-date 2016 in Sälen
Destination Dalarna is a voluntary and open initiative bringing together a number of stakeholders with the common goal to lift Dalarna tourism. Within the framework of Destination Dalarna, work was started in 2007 on generating ideas on what could be done for tourism and what long-term goals were wanted to achieve.
An up-to-date conference was held in Sälen this fall, and two SAPmembers went their at their own expense as participation was considered outside “the realms” of our association, in other words this was nothing that could be stated as appropriate for spending member means on.
At our own future conference mentioned above also the rules and regulations for a plotowners’ association (Samfällighetsförening) were scrutinized, and questions were posed to Mr. Berseus from KSAK who is said to have special knowledge on these matters. According to the summary from the conference no questions on this matter were left unanswered, and the hope is that the questions will be revealed on the Member Forum in the Conference folder. It is of the utmost importance that we abide by the rules made for this organisation which is a key stone in Swedish communities.

A note from the editor
There is one important thing we need to do in our community – among a lot of other things, naturally, but this one I as responsible for information consider for paramount, and I am actually ashamed that we haven’t done it years ago. We must have an English version of our statutes (stadgar). It is really embarrassing that this important document is not available for our non-Swedish speaking members of which we have so many that we consider it necessary and important that our newsletter be written in English and our annual general meeting be held in English as well. And I suggest that we turn to a professional translator with knowledge of legal language and terminology. When it comes to settling of disagreements interpretations of rules and laws is what decides what is right and wrong. I urge the board to do something about it as soon as possible, and I consider it a must in time before our annual meeting 2017.

Member Forum
How often do you check the Forum for news? Once a week? Once a month? Now and then? In between? Never, because you forgot your password?
Let us start there: When you log in and remembered your correct password let your browser remember that password! (Just don’t use the same password as the one you use for your bank accounts. It is not that important).
If you can’t remember your password click I forgot my password and you’ll get a new one in your e-mail.
When you are in logged you see the page with the three Forums – Public, Member and Styrelsen (Board – that one is for the board to have their internal discussions.)
But you also see in the upper left corner a button named Quick links. Click on that and on New posts and you immediately see if there are any new posts since your last visit. Easy!!

And right now you’ll find the link to Russell’s wonderful article about Siljan AirPark in Instrument Pilot! Thank you, Russell!

Airparker Johan Hammarström makes headlines
The Swedish newspaper Dagens Industri had recently (November 6th) a two page article about Johan Hammarström’s business Transistor which develops and manufactures smart technology for hearing impaired people. By investing in smart technologies and hard work Johan has in only four years succeeded in turning this small and not very prosperous business into a company with now 5 employees plus three consultants and an annual revenue of 10,6 MSek but a 5-years goal of four till five times the present activity and on an international basis. Congratulations to this fine article and the result of your hard work.

Letter to the editor from the diligent reader!
SAP News is every time a hit and we can be happy in Siljan Airpark to have such an ambitious editor as Ingrid. However, the name SAP is a bit strange. To those of us who have been around for a number af years SAP is the acronym of the Social Democratic Workers’ Party. When you google SAP, one finds only scattered articles on the Social Democrats but nowhere the acronym SAP. It stands instead of a giant software company SAP. In addition you can in Google note that the Social Democrats a number of years ago changed the addition of “working party” to “Progressive Party”. The argument that SAP News evocative of a social democratic journal can thus be excluded.
However, I have more arguments as follows:
When our excellent newsletter started 2010.10.01 with No. 1 it was named Siljan Airpark Newsletter until 2011.05.10 No. 5 when suddenly the name had been changed to SAP News. The blame for this change of name, however, is that Danne won some sort of naming contest which the editor had announced. Since then it has been called SAP news even though we in all other context named the Plotowners Association SAPS ever since its inception and still call it that. In all memos and in every annual meeting minutes since then it has been called the SAPS and not SAP. For example, the recent annual meeting protocols before the association changed its name. Both abbreviations, however, has been explained as follows:
SAP Siljan Airpark
SAPS Siljan Airpark community association
My proposal is therefore that the editor announces a new name contest and at the same moment declares competition settled and the winning name was SAPS. A bottle of wine will be favourably received for the proposal in accordance with past tradition. But if I do not win I will not be sorry about that.
Sincerely, Christer Wretlind

Flight safety
The perennial perils of winter weather are upon us once again. Seasonal weather, consisting of low temperatures and visibilities, freezing rain, ice, drizzle, snow, and fog, brings many additional challenges to flight operations. Hazards exist everywhere, and may not be clearly evident. Read more on http://campaign.r20.constantcontact.com/render?m=1101073741327&ca=b3efaac2-8192-4fe9-b9c8-5f4023840fd0 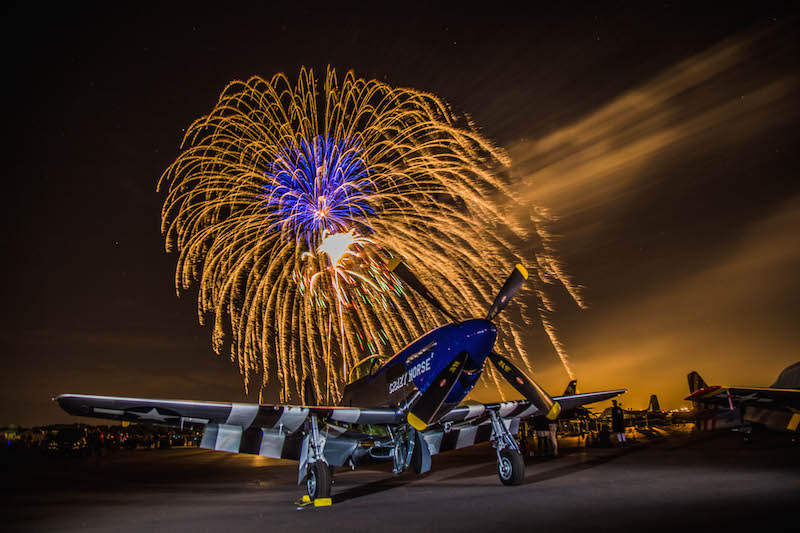 Picture of the Day from Pulse of Aviation

It’s all about communication