Autumn is definitely here, winter is around the corner, and all the beautiful colours of this season are unfolding more and more everyday in Siljan Airpark. Maples are glowing in red and birches look like somebody put golden coins on all the twigs and branches. It is the season where you feel lucky when the weather invites you to go flying as the air oftentimes will be crisp, and both ceiling and visibility is turned on to “Infinite” – or as a pilot friend puts is: you can see as far as you feel like! Just keep the minus degrees off the threshold in order to let the beautiful colours last as long as possible. But with Halloween passed next stop is frost and snow. It is just a fact.

The Road – or What happened to the potholes

This time of the year we always encounter car wrecking pot holes in our roads. That is quite the normal conditions on gravel roads in Dalarna generally. The pot holes worsen when it rains. Filling them with loose gravel tends to increase the misery and make the pots deeper. Something had to be done, and this month something was done to “our” pot holes. President Alexander Sülberg answers to the question of “What is happening? Did we receive a gift? A hidden foundation?” : “Based on what we were able to spend according to this year’s budget and after several meetings (including Fredrik Diehl and Sinje as subject matter experts) DalaFrakt has now cleaned many of the ditches and put out fresh gravel on our roads starting at the mailboxes all the way around the airpark. Also all other roads have been done (as far as possible) with the plane to get rid of all potholes. Same goes for the main entrance alongside the aeroclub. (…) The new gravel is based on recycled asphalt and should no create as much dust, we may not have to put on any salt there going forward. As the quality of the road is so good at the moment a few people around already noticed a few speeding cars … please be reminded to drive with care!” 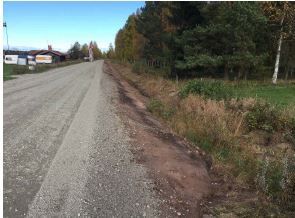 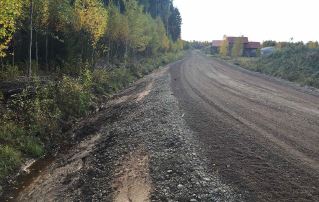 At a cost we can afford it seems like we got ourselves a decent surface for driving cars on if we do it with care and point out for those who still haven’t got the point by themselves that careful driving will postpone further repair and consequently increased expenses for everyone. Easy.

At the annual general meeting this year the board was given the mandate to sign a contract with Weda Skog about felling the row of trees west of the runway. Cutting should take place whenever the conditions were right for this. In the mean time members were again reminded of the opportunity to cut firewood for free. However, no one grabbed the chance for stacking firewood for the coming winter – relying on global warming? – and therefore the contract now has been signed with Weda Skog. In order to keep costs down Weda Skog will try to coordinate with other jobs in the area. Eliminating this row of trees is expected to enhance flight safety in landing and take-off.

Thanks to local photographers (Ingmar and Alexander) we are able to bring to you documentation of building progresses in the airpark. 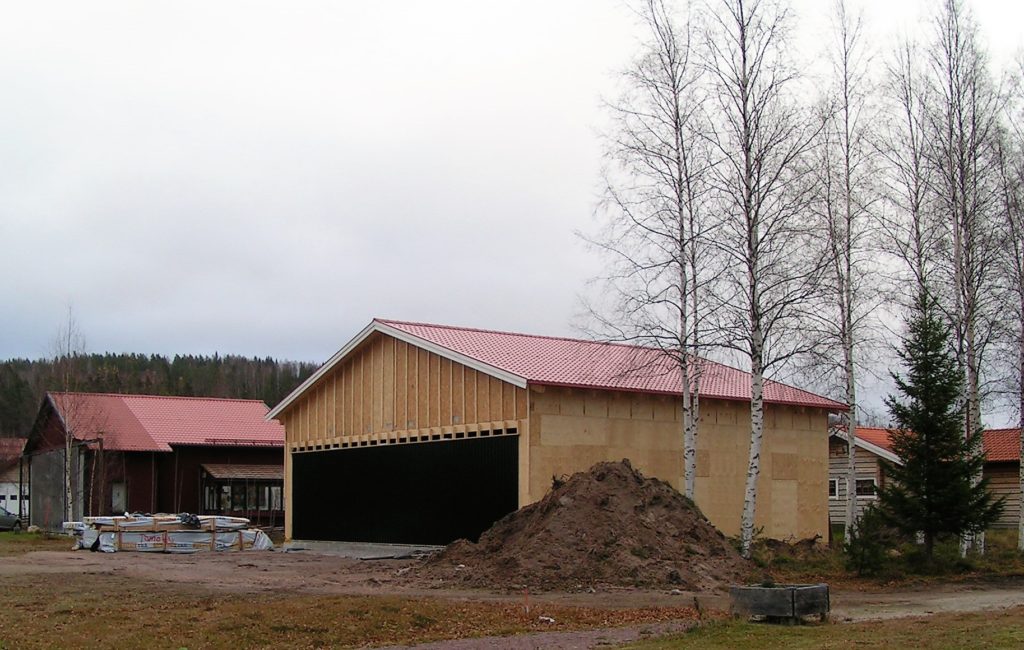 Already now the Safir can move into its new home on Rodervägen. At the south end of the airpark another Falu-red building has appeared 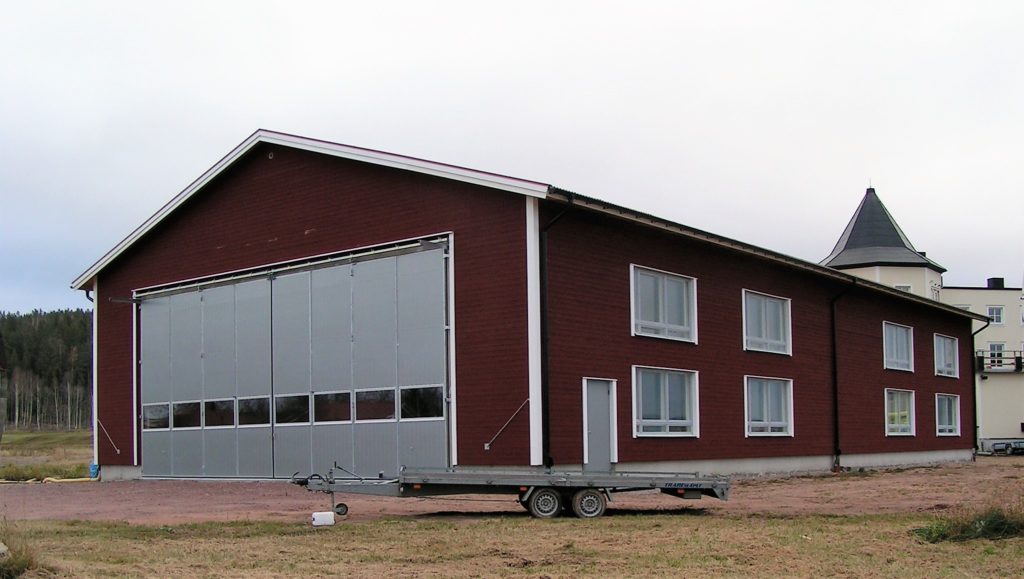 and up north the transformation of plot # 21 is approaching completion. No lazy cats in this neighbourhood!!

Autumn is also the season for “slow food” – good stews that simmer for hours and which tastes even better the day after – if there is anything left!! If you can get hold of some elk-meat it makes the most delicious stew but be sure to cook it the day before you want to serve it. It deserves that!!

We fired the meat bits with butter, red onions and garlic, added a little wheat flour, water, leek, mushrooms, thyme, rosemary and let it simmer for about 45 minutes till the meat was tender. As we were out of carrots I added some peas to sweeten and then a generous splash of whipping cream! Salt and pepper, maybe a little stock from venison. Served with potatoes, or mashed potatoes and don’t forget the cranberry jam and a Shiraz. Yummy!! 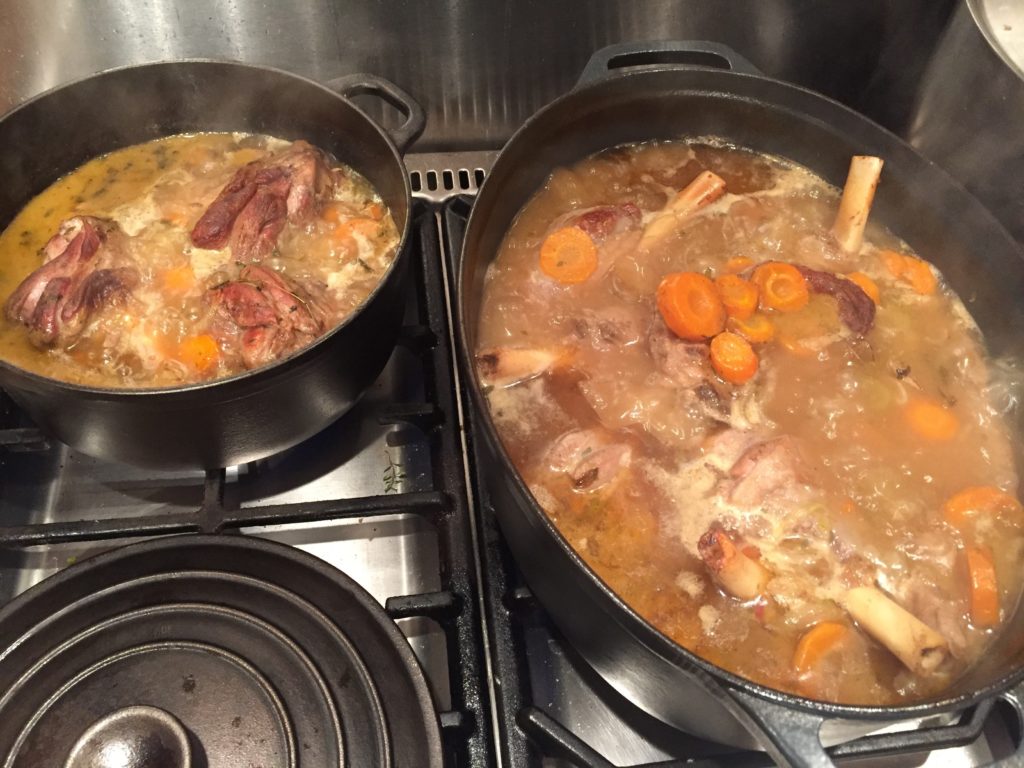 This is not a picture of my elk-stew but the stew that Sinje tossed together on a cold autumn evening and then called together all the hungry airparkers present. It turned out a wonderful party, lots of talk, and lots of food. Food has always been a good “socializer” crossing languages, cultures, faiths, and convictions. A good meal should be mandatory prior to serious decisions. Our culture calls for a good meal after serious business, negotiations, and decisions. Should we change that??? 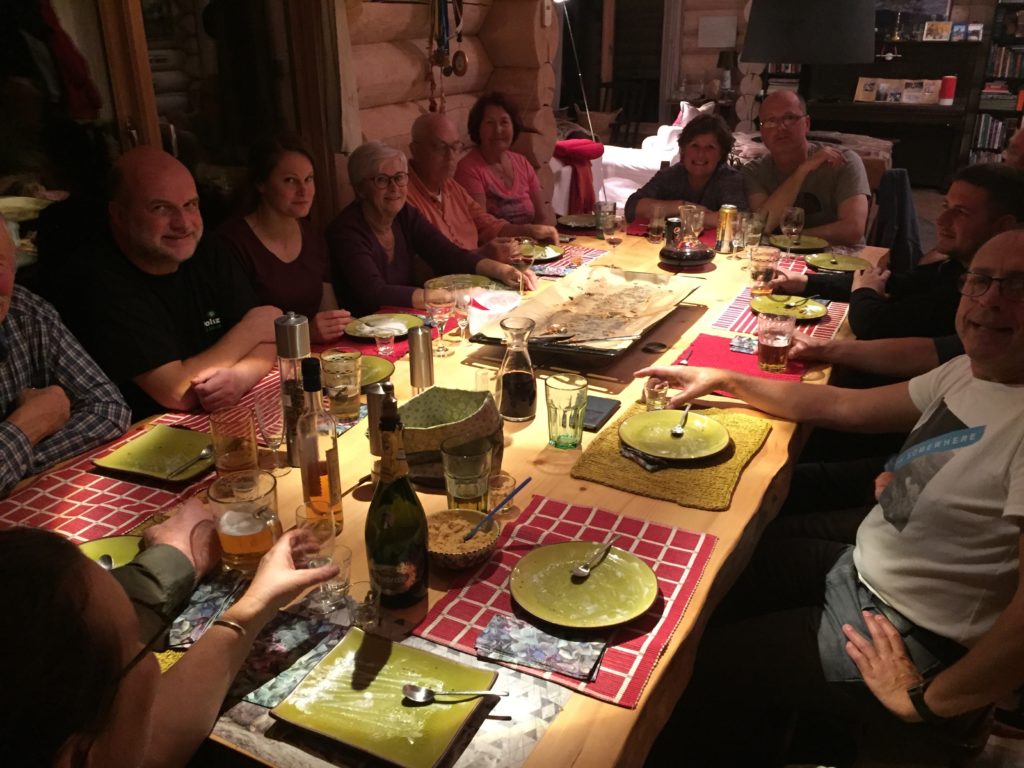 Christmas is sneaking upon us. Before you know it the mix of stress and joy which is the hallmark of December for many people is occupying your mind and time. Why not add some on the joy-side and get yourself a pretty new candle holder for December? Light one candle every Sunday and on Christmas you will have this charming crown of lights to brighten up the dark hours. On December 10th (2nd advent) a Christmas Fair is arranged at Sockenstugan where our local artist Knut Hoffman will be offering some of his art works for sale, a huge variety of the traditional Christmas candle holder . (I’m afraid that the beautiful cupboard is not for sale- but ask Knut – he made it!!) 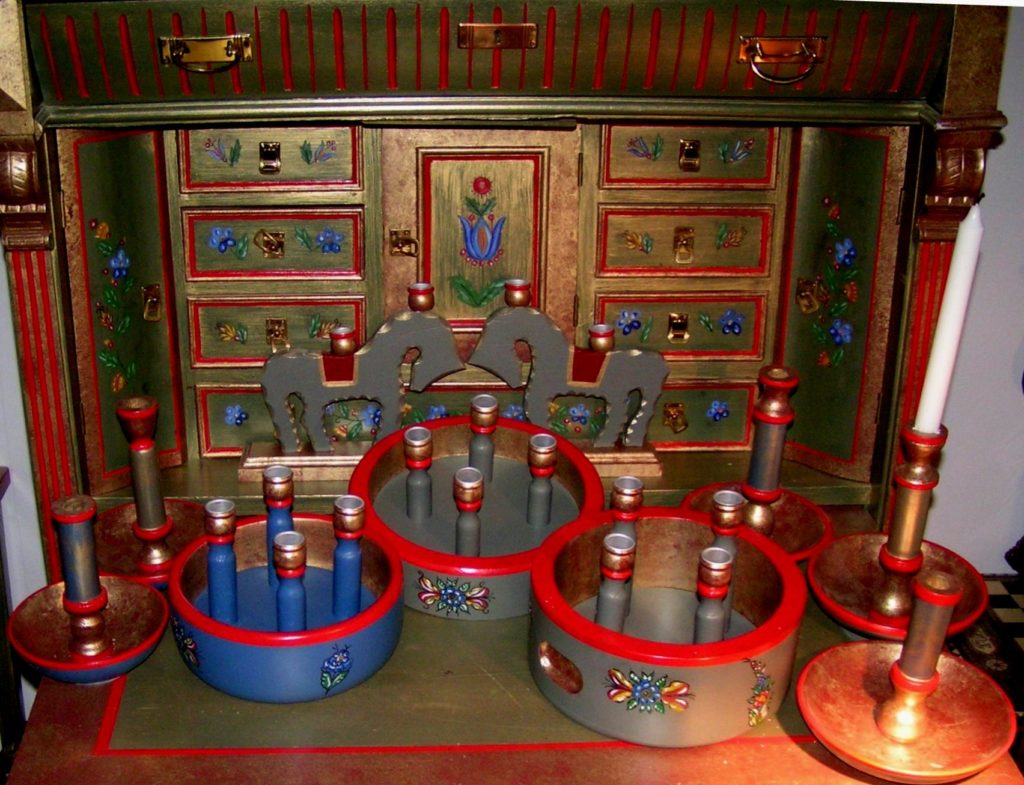 From the Flying club

The flying club reports that the kitchen floor now is ready. As you may recall the flying club had serious water damage under the kitchen floor with the consequence that the entire kitchen had to be taken down in order to get to the floor. Now the floor is ready for a new kitchen to move in as the old one turned out to be down right rotten! Generous donations from members – and the insurance company – have made this possible.

This is good because talking about surface it seems that wild boars have been ploughing the grass strip! And this has happened in Gagnef and Tierp as well. The piglets are cute, admitted, but they unfortunately do not stay that way! We don’t want them in this neighbourhood. This is what they have accomplished with their snouts! No fun landing on that! Why don’t they stick to truffle hunting! That would be a lot more appreciated!! 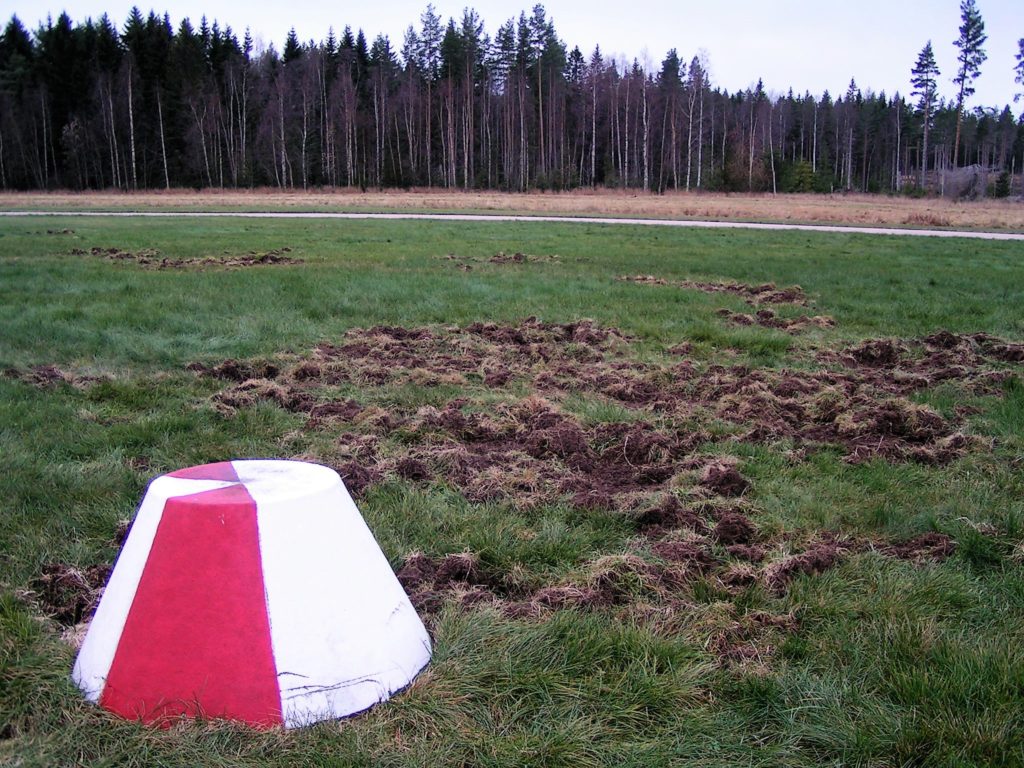 There was this hope of seeing the motor glider UAC in the air this summer, and we almost made it! The wings were fitted, engine was tested, instruments calibrated and tested. But one detailed remained to be finished and the UAC has to face another winter in the hangar without wings. Let’s hope for next summer…

From the “World Press”

In Falukuriren’s Saturday special “Pralinen” beginning of October you could read a nice article about this quaint village where “the house owners have hangars in stead of garages and airy solutions in everyday life. Here the neighbour will fly his partner to Germany where she works as a pilot. Another inhabitant is commuting every other week to Norwegian oil rigs. The six flagpoles are not enough to encompass all the nationalities living in Siljan Airpark “. Due to copyright rules we can unfortunately not bring excerpts from the article but you can check on www.dt.se and you may be able to find the article nicely illustrated with photos from our airpark.

On October 25th in Sockenstugan in Siljansnäs Johan Hammarström told a full room i.e. about 100 persons!! – about his adventurous flight around the world. Referred to as really worth watching and listening to.

He notes: “The higher incidence of accidents in experimental aircraft is just as logical as the fact that the fatal accident rate in private (general) aviation is almost infinitely higher than it is in airline flying. When more freedom is granted by reducing regulations and eliminating stifling procedures, then the risk goes up.”

In general aviation, he notes, “risk management is left solely to the pilot. For experimental-amateur built, that freedom extends to the building and testing of the airplane, though the FAA does have requirements for the flight testing of newly-built E-AB airplanes.”

He continues: “The accident record in private flying when I soloed in 1951 was about like the accident record in experimental flying today. When I started, we were free spirits, a band of brothers, who loved to fly. It was almost holy and we weren’t looking for anyone to save us. We knew that what we were doing was a lot riskier than knitting and we didn’t care. That is all true of many, if not most, experimental pilots today and I think that in both cases the accident record is simply the result of the interface between the romance of flying and the pilots who practice the art.”

“So if you ask me what is wrong with experimental pilots, I say nothing. Just leave them alone and let them enjoy flying.” 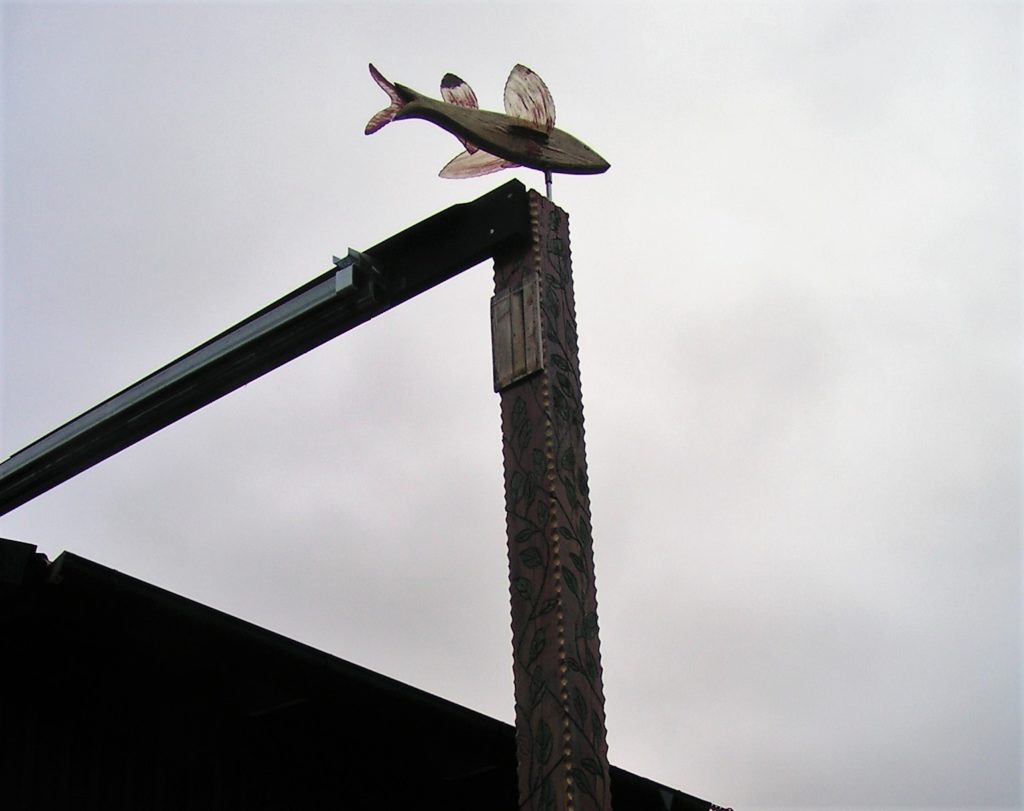 One way to look at things in life…