If it hadn’t been for all the greenery outside the windows you’d get the impression that Siljan Airpark was skipped this year when summer was distributed. What happened? Be just, you may argue, there have been days now and then with sun and summer temperatures but we miss the periods of summer, days in a row where the temperature never goes below 20 degrees 24/7.

No, one day, maybe two days now and then before the grey sky and chilly wind returns. The hammock is swaying in the wind, abandoned as a forgotten toy on the beach. Grumpff. And as the calendar rushes away in direction Christmas you start worrying: will there be time left for some summer?

But then your memories of long, warm august evenings with candles on the porch around the barbecue return and the world looks great again. This is also the time of the year where the water in the lakes and the sea has warmed up and bathing is more than an achievement – it is pure enjoyment! So, maybe patience is the thing to mobilise to get through this parade of low pressures passing from west towards east with Siljan Airpark placed on the absolute highway centre! 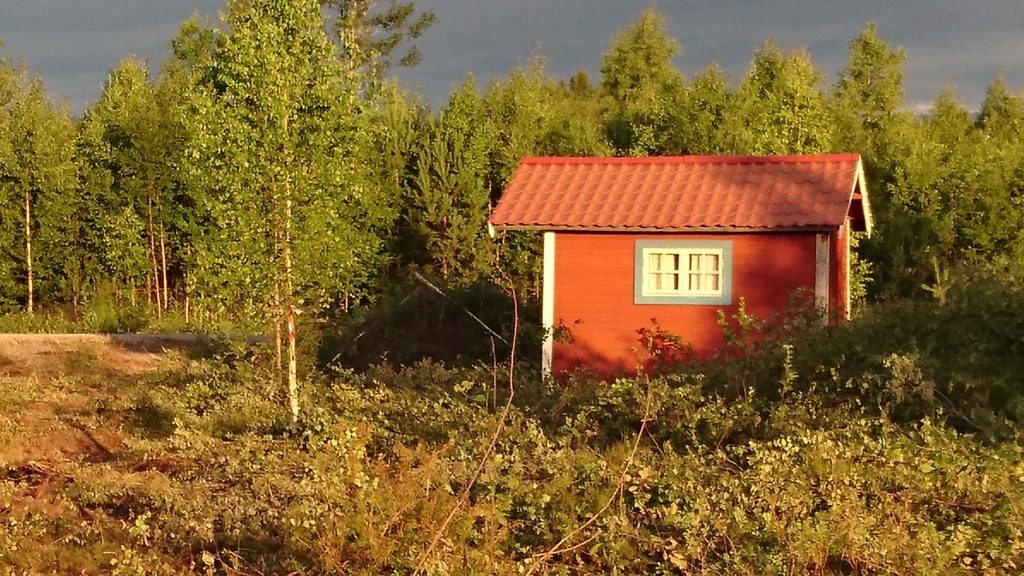 Local news Admit it: when it is above 25 degrees who wants to clear plots, dig holes and build houses? So from that perspective a cool summer is beneficial for building activities. On Vindmyrevägen a little house came out of the woods with a little help from Andreas who cleared away the scrubs and trees from this plot. Widen your views! 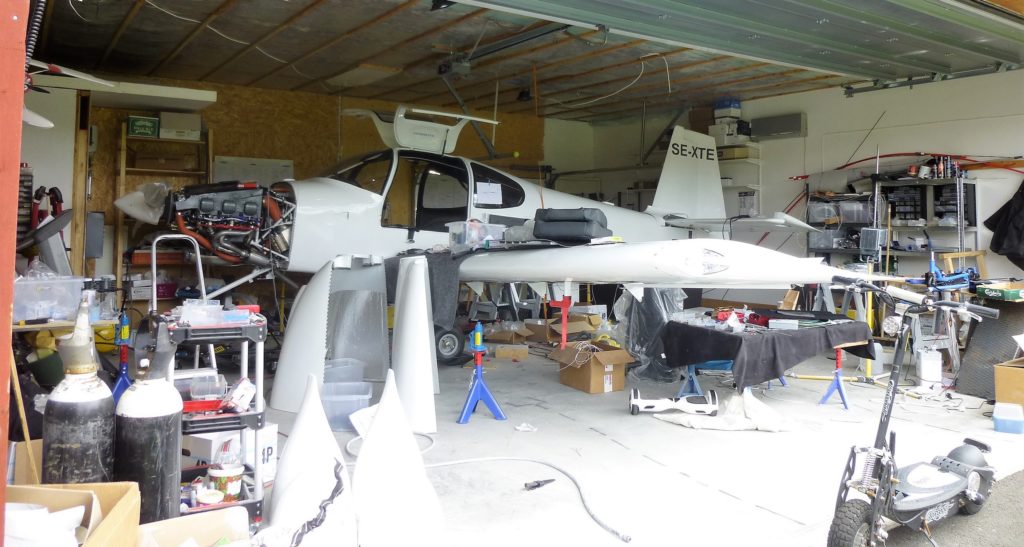 dation for a new house on Rollvägen is also in place … and preparations for a hangar as well …and Propellervägen may boast of a nearly finished RV10 …the only one in Sweden, SE-XTE. A beauty in white – waiting for roll- out.

For a while samfällighetsföreningen shared a mailbox with the chairman and with its own address label added on to the mailbox. Since this address label now have been removed several times and consequently caused mail to Siljan Airpark Samfällighetsförening to be returned to sender creating a risk of delayed payment of bills, fines for late payment etc. an extra mailbox 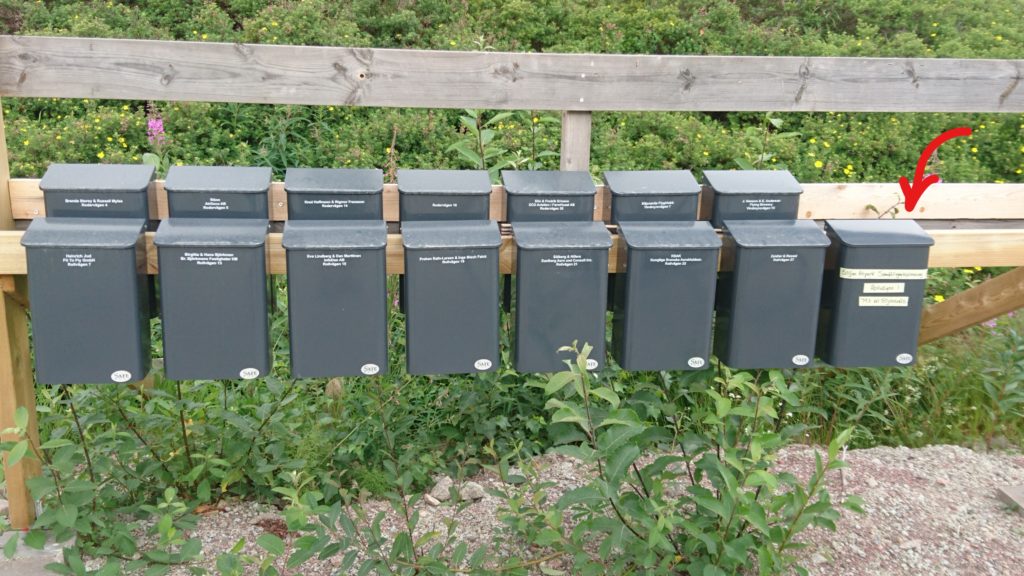 have been fitted on the mailbox stand exclusively for mail to Siljan Airpark Samfällighetsförening. Fortunately Elin E. had an extra mailbox so it could be fixed without delay. Elin also has ordered an “official” address label for the mailbox but until it arrives a simple sticker is put on the box, and hopefully will be left there in peace so we can prevent this nuisance of being forced to pay unnecessary money!

Remember 6 years ago when a bunch of airparkers were hiding giggling in the hangar of SE-XXX with flags and a bottle of bubbly water waiting for the arrival of this fabulous airplane on that special day? The event was described like this in SAPNews: 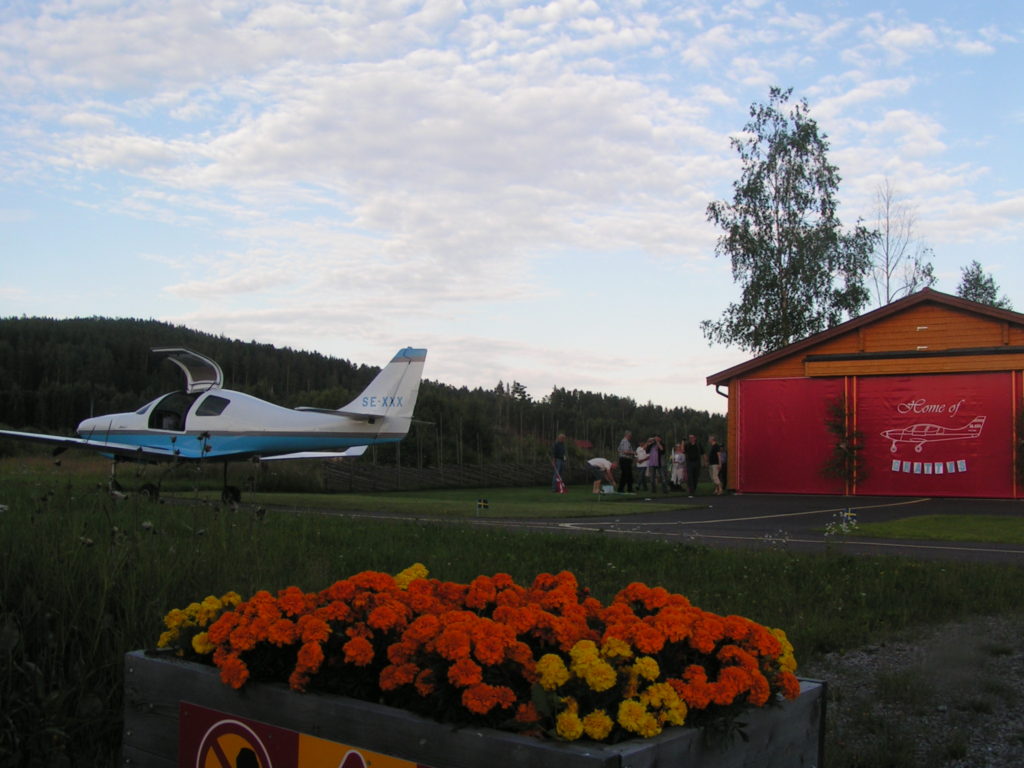 “Christer Wretlind our secretary on the board, the proud owner of SE-XXX received recently the final approval and certification of his home built Lancair, the fastest Lancair in Sweden we are told. A spontaneous reception of the triple-X and her proud owner was hastily arranged and took Christer by complete surprise when he rolled up in front of his hangar.

Congratulations, Christer, quite a milestone for you.”

A few days ago Christer took his old friend on their last ride together across the Atlantic Ocean to Florida to hand her over to a broker with the order of finding a kind owner who will know how to appreciate the properties of “triple X”. An era is closed. No more holding our breath when this potent aircraft was on short final with a speed that would have sent anybody else out in the cow pasture up north. No more standing erect in your bed on Monday mornings at 6 o’clock when all 300 horses were let loose with a roar worthy of a lion ki 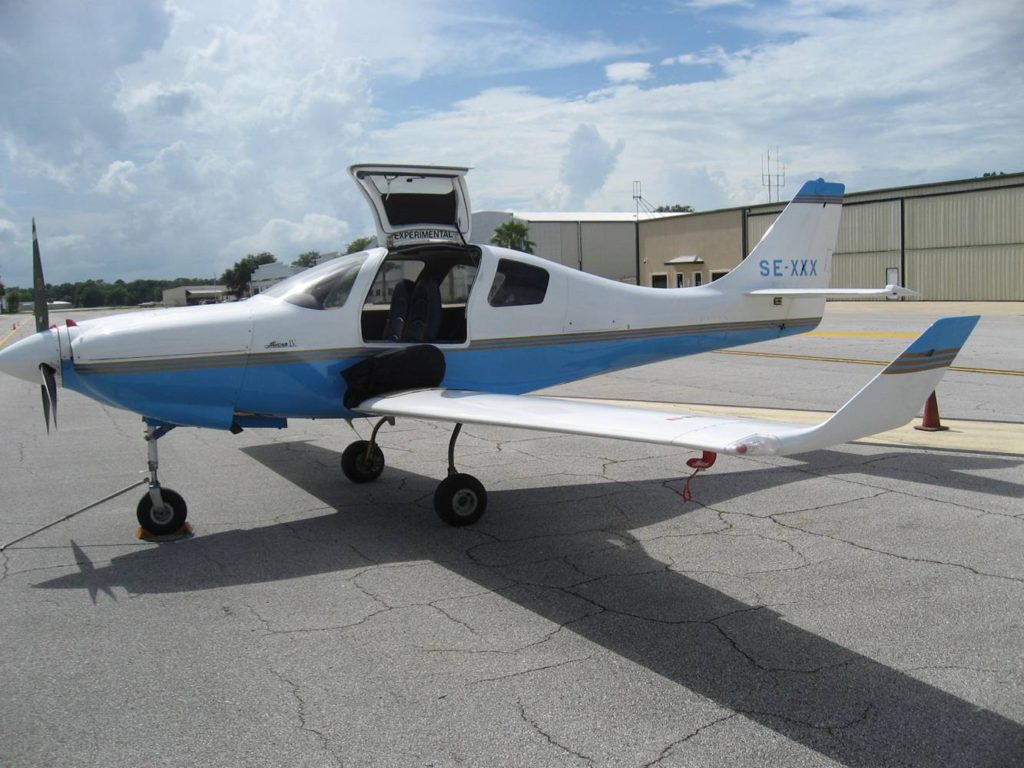 ng. No more silent applause to the pilot when watching him getting in or out of this airplane. Takes a lithe and agile person. Will miss all this – and her – and look forward to her successor. (Photos and photo text by Christer Wretlind).

Nothing like a taxiway for partying! The word went around on Wednesday that the barbecue at Alexander and

Antje’s place would be ready on Saturday. The rain stopped, the barbecue was turned on, the beer on tap cooled down, piles of food brought to Alexander and Antje’s site, and a bring-your-own-party was born. One of the important and well-developed features in a community like ours: more or less spontaneous get-togethers around the barbecue.

Some charming details in the airpark 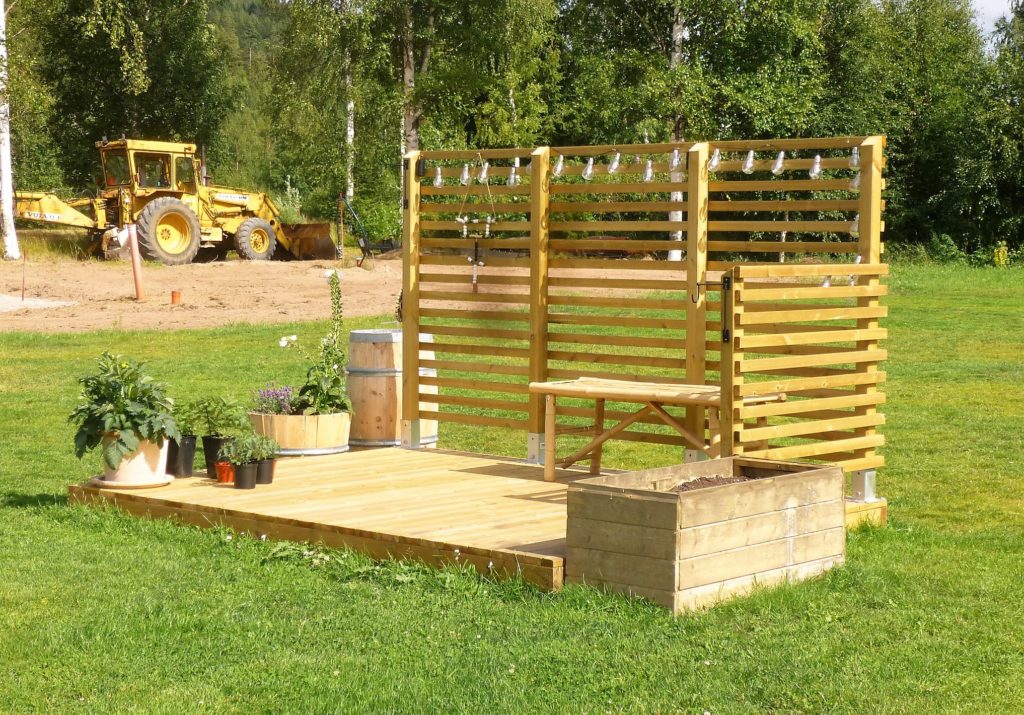 This annual flying club event with a name impossible to pronounce for a non-Swede and impossible to understand without explanation runs on the 2nd Saturday of August as it has done for 27 years. The 28th time this year on August 12th.

For the last four years al-productions with Anders and Gunilla Löfvenborg in front has been the captain on the boat. However, as there was a mutual agreement on putting this collaboration on hold the flying club members are holding the reins themselves this year. As a consequence the flying club has decided to scale down the event to a cozy fly-in “like in the old days”.

This is not a fit of nostalgia but of sheer insight into the actual capacity of the club. “We have to be realistic”, they say, “and do what we can actually handle. No one is getting younger, and let us be honest the rate of recruitment of young members is not impressive”. The result is that the down scaled concept has created enthusiasm and eagerness in the flying club, and spirits are high when meetings about the event are being held.

It will be a fly-in where the main thing is that the public can get close to the airplanes and to the pilots, to look, touch, and chat. And in case there is a pilot or two who want to show what his or her aircraft can do they can climb into the cockpit, take off, and give a little presentation. No air show as such. There will be, as usual, Åkdon och Termos Friday night where old cars gather on the area, and on Saturday there will be hamburgers, hot dogs, coffee, and ice cream for sale. And naturally the good old lax-supper (Swedish salmon) on Saturday evening will also take place. Crayfish you buy at the table. With music.

So – to conclude: a cozy down scaled fly-in with focus on home-builders. Still there will be a need for volunteers to let the public in, parking cars, parking airplanes, selling food and drink and cleaning up. Therefore, dear airparkers and members of the flying club, your flying club again this year asks you to spend some hours on Saturday august 12th fixing and selling food in order to help feeding the money box of the club.

And very importantly: remember to buy your ticket for the Saturday evening dinner in advance. There is limited space and the principle is first come first served. Turn to Ingmar to get a ticket. The price is 200Skr for salmon, potatoes, green salad, sauce, and coffee. Beverages are available.

When was the last time you calculated weight and balance including runway distance for take-off? Before you land safely on a remote grass strip in the highlands during summertime with high temperatures and occasionally showers you need to do this little simple piece of mathematics to be sure that you will get off the ground again once the picnic is finished.

We learned how to do it when in flight school, a good habit that should be maintained. Might save your life…

When looking into a discussion forum on the topic two entries caught my eye immediately:

“Good rule of thumb that will keep you out of trouble. If you are calculating your take off distance and it is that close you need to be rethinking what you are about to do.”

“It is possible to land at a place where you can’t take off. Most pilots can bring it in to an unfamiliar strip. The gotcha is usually the departure. When it comes to distances, way better to ‘know before you go,’ than to be sweat-palmed nervous at the end of the runway, give ‘er hell, and hope.”

Along the beaches of Lake Siljan you can find the aromatic herb pors, or bog myrtle or sweet gale, many names for a very tasty herb that can raise your enjoyment of schnaps to unknown heights!

Take a bottle of vodka or any other tasteless alcohol around 40%, add 100- 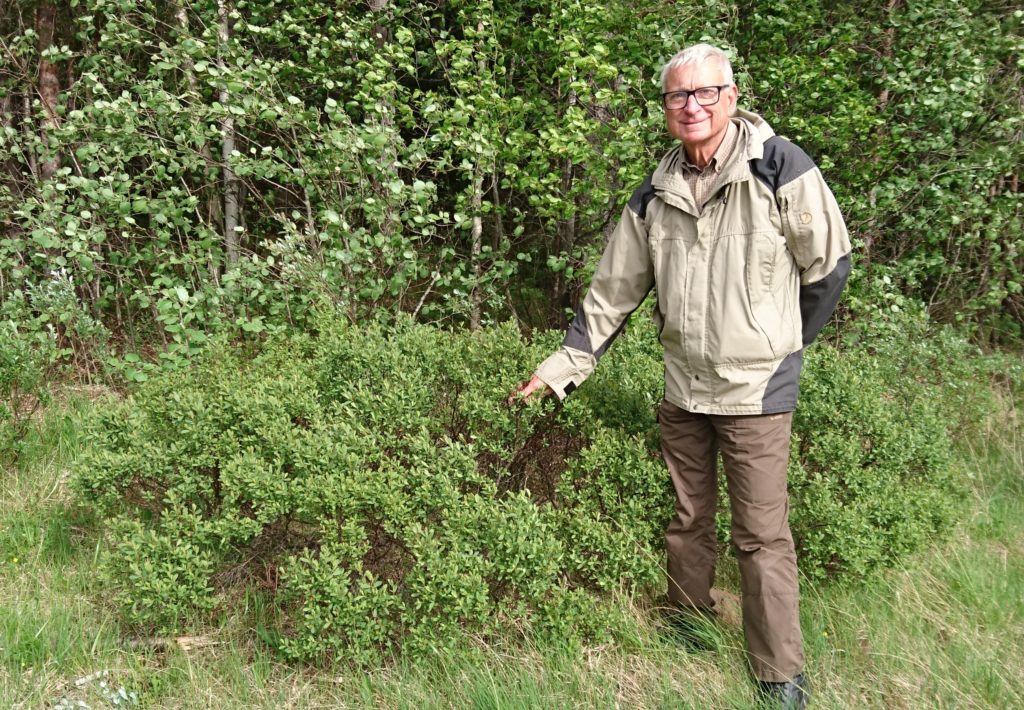 200 fresh pors leaves and leave it for a week! Filter and taste, and – if you can – leave it for one year! If you can’t – drink it with your marinated herring or crayfish and enjoy!

Pors is said to have many characteristics: Leaves and twigs in the bed work against lice and fleas. Some also believe that pors has a beneficial effect on bumps, inflammation of the ears, against the nose bleed and are good for diarrhoea.

See, somebody cut the vegetation along small path around the fire pond. Now you can stroll there again with your dog – or without. Thank you, somebody.

The water level in the pond is low, surely due to the lack of rain in the area this summer. Hard to believe with all the water pouring down from the sky the last couple of days, but it is the truth. According to SMHI, the meteorological institute of Sweden, Dalarna had only 60% of the normal precipitation (1961-1990) for the period Jan 1st – July 29th 2017).

Printed with permission from Gary Clark, see more on www.swamp.com..au