Already September, high skies – or? If you ask people most of them find that there must be just a little bit of summer left for us poor southern Scandinavians. Apparently summer stayed north of us and south of us, thanks to the jet streams that normally take a curved course across northern Europe and thus distribute warmth and chill more fairly than it did this summer where the track was straight across leaving mid-Scandinavia and northern Europe in rain, wind and low temperatures. At least this is the excuse for the lousy summer weather that our meteorologists on Danish TV came up with. Shall we believe them? We might as well, we cannot change it and at least we can be happy that we did not have to spend our summer in southern Europe in muggy 40 degrees July as Kendas reported from Slovenia. In Dalarne they can breathe, they say.

But the cranes captured by photographer Jonny Pettersson in the midst of Kräftstjärtsvängen don’t bother t check the forecast. They are off now, to Spain, where a long winter will give them, the strength to return in March-April.

But one sunny day in august this beauty was rolled out of the Diehl hangar and eagerly commented on by a crowd ready to witness the engine start-up. And it did! 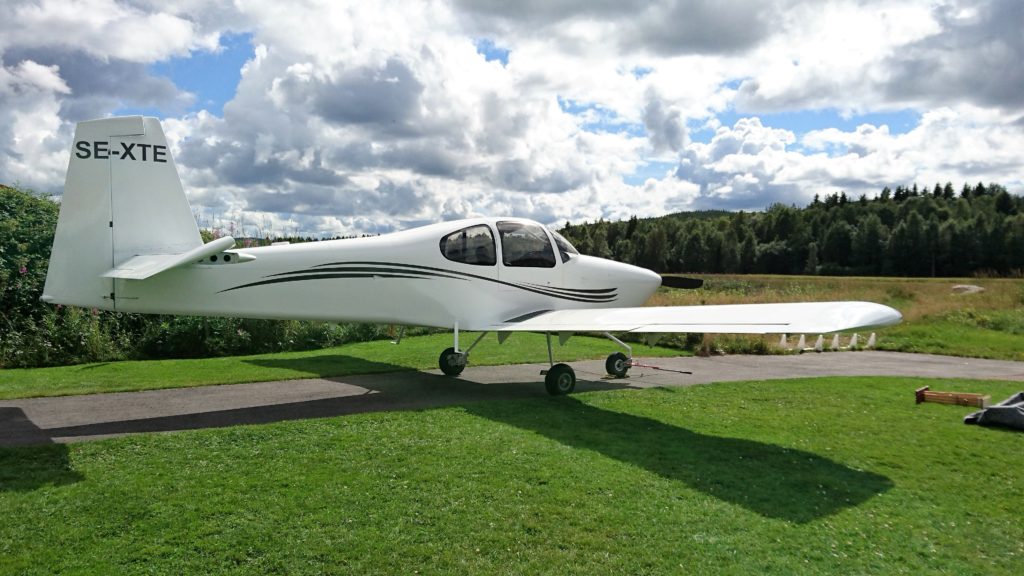 Builder and owner Fredrik Diehl could after 3000 hours’ work finally see his efforts crowned with success, and Anneli is looking forward to soon ticking off all the tasks that for a long time have been at the bottom of the Diehl to-do list!!

And on Sunday evening August 27th the maiden flight took

place!! About this the proud pilot says: “it went well, at little more adjustment is needed, the engine needs a little more fuel to cool but it went well.”

Congratulations to the Diehls, a four-seater, they can all go flying together. 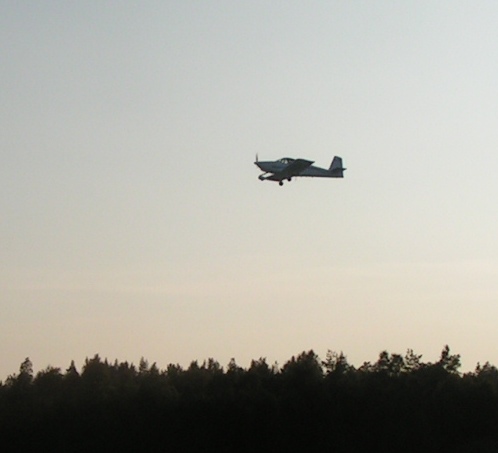 As usual we shall get together and help each other make our airpark look nice but also do the necessary things to control nature! On Saturday September 23rd a working day is planned and all available forces and sources are welcomed on this day which also is a social get-together event. At the beginning of our airpark the big focus was on cleaning up as illustrated by these photos from earlier year’s working days. That is by now no longer main focus thanks to great work already done in the early years. Nowadays the focus is on keeping clean and keeping down. We might consider importing a bunch of goats who as you know eat everything. But then again – who is to take care of the goats? A chain saw and a lawn mower are more easily kept so we’ll stick to that and rely on human muscles as well.

If you are able to attend just answer to the doodle poll http://doodle.com/poll/9zsxbahdd7pf2tmp

as soon as possible to give the board an overview of the number of participants. If you have suggestions to what should be done on Working Day please write office(at)siljanairpark.se . A simple lunch will be provided for by SAPS and in the evening we shall have a BBQ – bring your own food. Enjoy a couple of memories from previous working days. 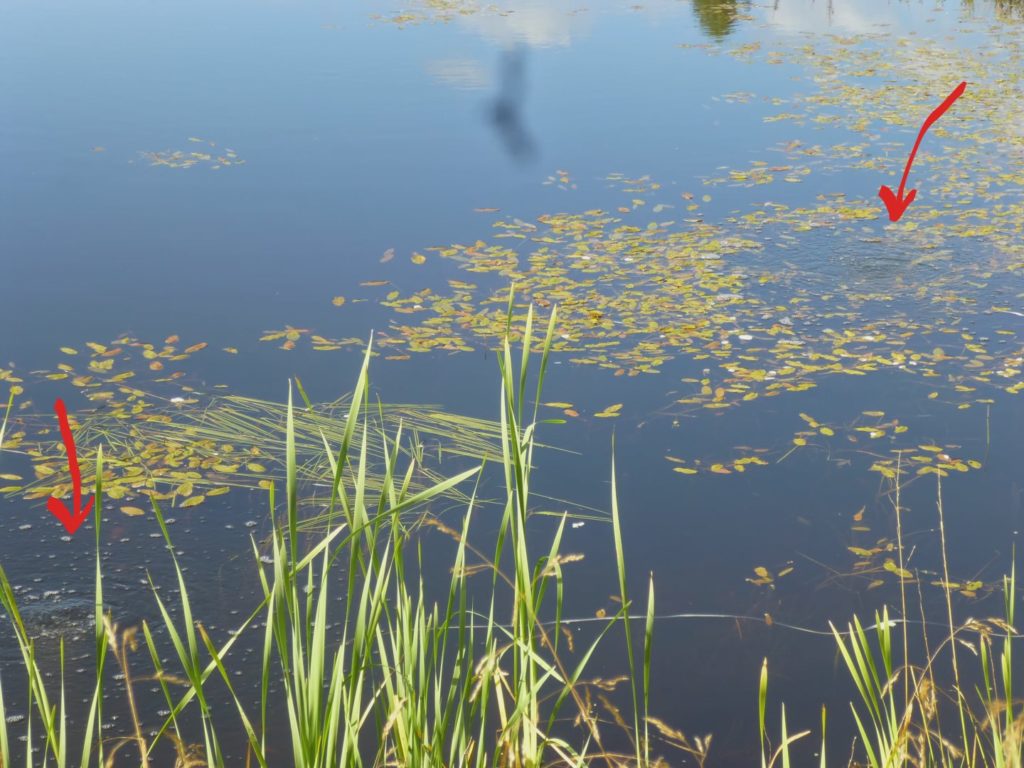 The firepond is living it’s own little life, very quietly in this summer where the lack of water lowered the surface to a level that created worried wrinkles in the foreheads. Jocke and Eiko installed Koi-fish to help clean up the pond – koi-fish eat grass we understand – but apparently the appetite was small because nothing really happened. Next step was to raise the content of oxygen in the water and to this end a small pump has been installed continuously airing the water in the pond. Hopefully this will sharpen the appetite and the koi-fish start eating the vegetation and bring back life to our pond. So if you stand at the edge of the pond and see the water bubbling in two places it is NOT an unsuccessful fountain nor is it a local Nessie – it is just the attempt to ease the burden for the koi-fish.

Bringing Siljan Airpark on the map

Our unique airpark has by now entered the list of unique places to stay during vacation in Dalarne. Watch this video where several features in Siljan Airpark are illustrated. The video is an incitement to stay places off main stream or when you are tired of standard hotels or camp sites. Other examples are a tent in the wilderness, a train car, a teepee, or the mines in Falun.

The story about the airpark starts around 5:20 in the video.

The catcher in the rye

An unusual early morning sound got your editor out of bed with a leap! It did sound like a roaring cow, calf maybe, 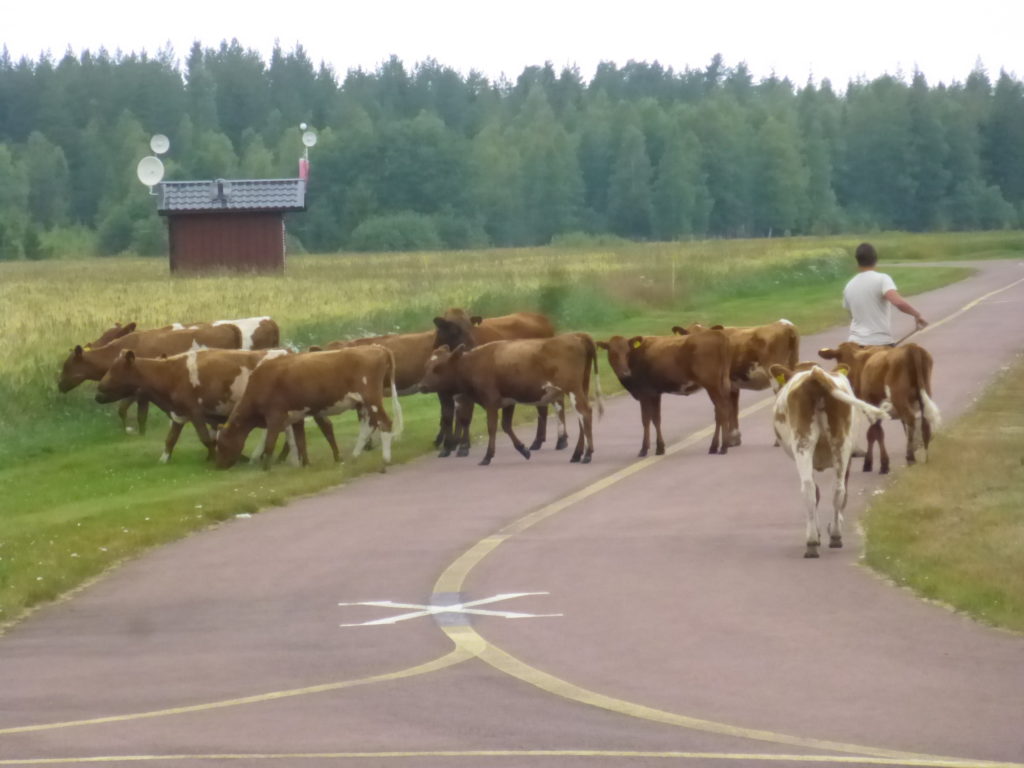 right outside the house. The sight was just as unusual: Fredrik herding a flock of heifers along Charlie and X-ray and soon assisted by Niklas. The two cowboys did a very good job of keeping the creatures together, a few attempted to take a gourmet detour into the rye but were met by Fredrik’s insisting hay rake. Soon the farmer came driving his car in the safety zone all the way up to Alfa where the heifers seeing their master lumped to him and followed him nicely behind the fence. Peace restored.

Fiber net has been installed in those houses who signed up for it. The rest of the old infrastructure has been renewed and switched over to the fiber net in the pump-house and data are furthered by our old antennas. So even if you did not sign up for fiber net yourself you still get the benefit of the SAPS deal and get a swifter and more stable connection at a lower price.

To facilitate easier, more reliable, and smoother water consumption monitoring a procedure with a photo

forwarded to the e-mail address water(at)siljanairpark.se 4 times a year for permanent residents and people who visit very frequently during the year. For people visiting less frequently a routine of sending a photo of your water meter reading when you leave your house will be sufficient. With a more frequent reading it will also be possible to catch leakages before they grow to these monstrous levels that we have experienced a couple of times.

From the flying club

The accounts from this year’s Kräftstjärtsväng – the 28th in a row – a being prepared, and so far it looks good. As usual everybody worried because this is what we do knowing that the continued existence of the flying club is more or less at stake. And as usual many members spent time and money producing, fixing, selling or buying. Luckily many flying club members are also airpark members and therefore easy to ask for help which was willingly rendered. Great thanks!

But the spirit and the enthusiasm this year differed from that of the last year or two. The board decided at an early point of time in the planning that this year a down scaled model for the fly-in would be used and focus would be on just a fly-in. An event of a size that could be handled now that we were on our own. And that was the right thing to do this year. No flying show was announced and nothing promised, and good was that for a visit from Västerås Historiska Flyg by the Heron was cancelled. This would have been first time a 4-engine aircraft landed 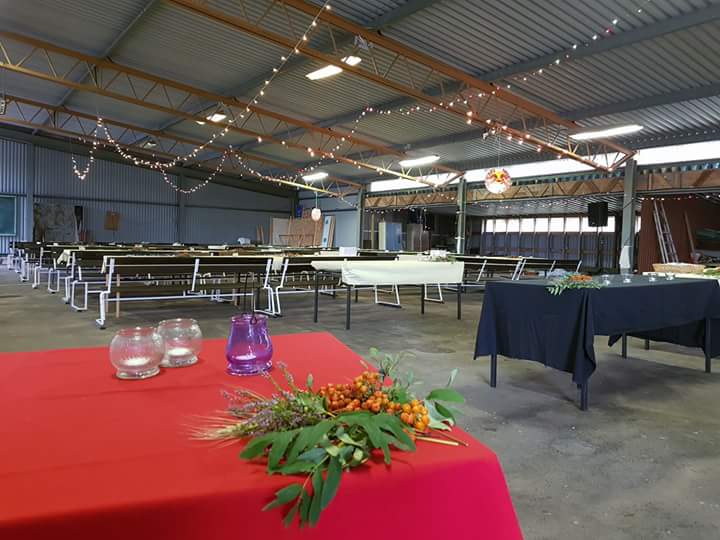 on ESVS. Which it did not! Next year, maybe? Also our almost very own RVators ran into trouble and only one plane showed up. But, jaw dropping sights we got all the same, this little RV, two SAAB Safires, our local Lancairs, our gliders and a lot of other airplanes, visitors as wells as residents, filled the sky with beautiful flying – all within the rules. And then we ate salmon and crayfish in the beautifully decorated hangar, thanks to Olle Sjögren who fitted Christmas lights lend by several members for this great purpose (pictures borrowed from the flying club facebook page). 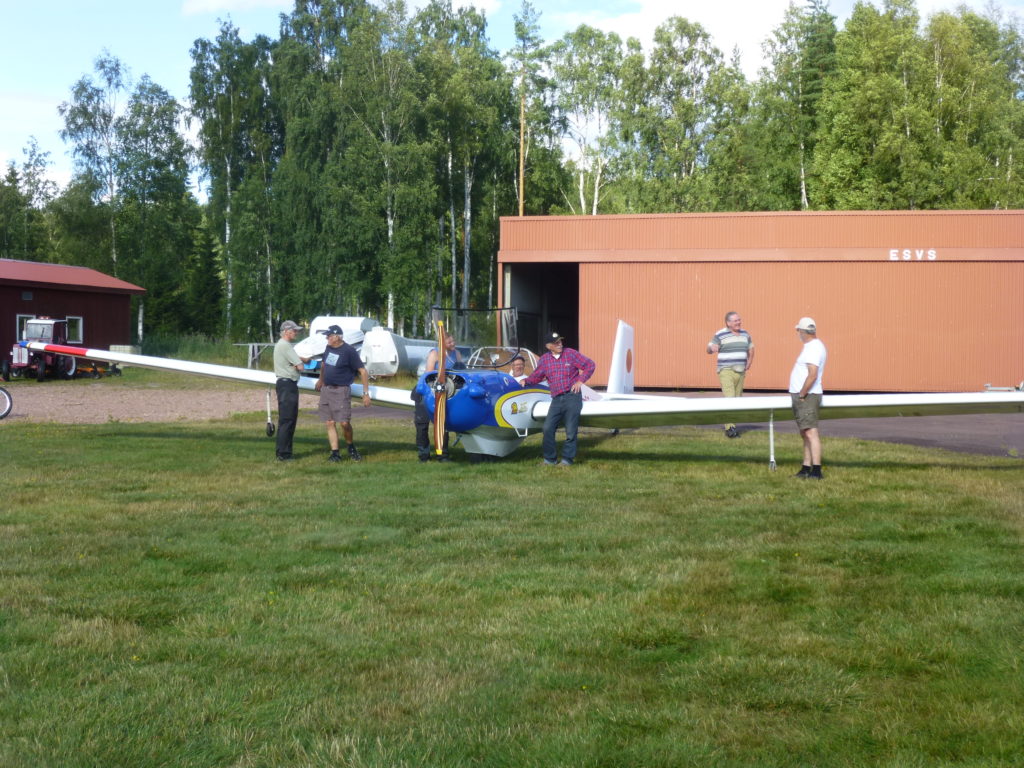 Soon we will be able to watch the ol

d lady in the sky again. Thanks to Leksands Sparbank and Christer Wretlind’s company Stockmos plus many hours of hard work by Ove Hermans in Orsa who built the engine, Toffe who was appointed responsible controller of the engine work, and a handful of club members who have been working on the airplane it was rolled out and the engine started on the very same day as SE-XTE was. Now 10 hours of test flying have to be applied before you yourself can have a swing under the clouds in good old UAC, Raserfalken. Hans Björkman has volunteered to be our test pilot along with Rune Leander and Johan Riis. A great day for flying on ESVS.

severe need of renovation. Five years ago the kitchen cupboards were taken down because of frost damage to the water pipes, the whole thing dried up and the old kitchen remounted. Apparently the repair on the water pipes was insufficiently done and the misery repeated itself this winter. Now the cupboards are so run down that a re-fitting is out of the question. A letter has already been sent out to the members asking for donations to the new kitchen, and – as usual – with positive responses as result. The generosity from the members is touching. Thanks to these generous donations the board can now put up new kitchen including a new and more economic fridge and freezer. Hopefully the donations will cover the actual expense; Blocket is eagerly searched for good offers.

New regulations about electric work in your house

By July 1st new regulations about who can do the electric work in your house were enforced. Check on this link below.

When you think you’ll have a break…

Printed with permission by Gary Clark, see more on www.swamp.com.au